This article is over 12 years, 0 months old
The session on the industrial response to the economic crisis saw a productive discussion about encouraging working class resistance.
Downloading PDF. Please wait...
Tuesday 12 January 2010

The session on the industrial response to the economic crisis saw a productive discussion about encouraging working class resistance.

It was introduced by SWP industrial organiser Michael Bradley. He said, “We don’t have to wait until after the election to see the scale of the attacks. As well as growing resistance, we are also seeing trade union leaders acting as a barrier to action.

“But we have also seen an important shift, with unofficial strikes, all-out strikes and occupations taking place. The recent wave of disputes have been highly political.

“A growing level of struggle increases the gap between the union bureaucracy and the rank and file.”

Michael and a number of people in the discussion raised the importance of standing for union positions.

They also spoke about the need for rank and file pressure, which acts as a countervailing force against the pressure that trade union officials face from the bosses and the government.

In the discussion, a wide range of activists – from public and private sector workplaces – spoke of the anger at the government’s attacks, and the importance of political, grassroots organisation to combat them.

Everyone emphasised the importance of responding quickly to attacks on workers.

There was also a discussion about the prospects of people fighting back in the face of crisis. A number of contributions pointed to the importance of the way that party members in the same union often meet in “fractions” to discuss strategy.

The way these industrial fractions worked in a number of unions was debated.

Workers, who were involved in major struggles in the last year, including post workers, firefighters, council workers and bus workers, spoke about their disputes.

A worker from the Fujitsu IT company spoke about the importance of solidarity from across the union movement in increasing the success of the strikes there.

More than 30 people spoke and another 70 submitted speakers’ slips but were not called because of time constraints.

Richard, who was part of the successful all-out strike at Tower Hamlets College last year, spoke about how it “involved laying the political groundwork beforehand.

“The balance of class forces on the ground enabled us to push the union into taking all-out action,” he said.

“It was the high level of activity in the run-up to the strike that gave everyone the necessary confidence.”

The conference also held a session to discuss the Right to Work campaign.

Its conference on 30 January already has more than 500 delegates registered, with the number growing every day.

Introducing the session, Chris Bambery said, “This will be a conference of resistance. It’s going to be a working conference, with serious workshops discussing how we organise.

“It has grown organically out of the work we have done around occupations and strikes.”

Delegates spoke about how they have related to workplaces through the campaign.

Julie from Glasgow said, “When Diageo announced 900 jobs would be cut in Kilmarnock we organised a Right to Work meeting.

“Ten workers came, and they all spoke. They were desperate to voice their anger.

“We were able to show a video from the Vestas occupation that had been chucked out of the window in a tennis ball especially for the meeting.”

Delegates heard that proposals at the conference will include backing the April march to defend the welfare state called by the National Pensioners’ Convention, and for an October demonstration at the Tory party conference if David Cameron wins the election.

Chris Bambery said, “We need to be organising serious delegation work to make this conference successful.

“We want to establish Right to Work branches up and down the country.

“This is the first time since the Miners’ Strike we’ve tried to do something like this. We need to pull out all the stops.” 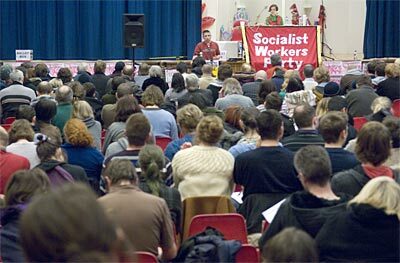 Branches should be at the centre of struggles

Debating the war, students and climate

Mobilising against the fascists and the racists