‘Workers need a chance to survive—this is the boiling point’

This article is over 10 years, 10 months old
The battle between Wisconsin’s unions and the state’s Republican governor Scott Walker moved to a new level on Saturday when over 100,000 people marched and rallied in support of union rights at the State Capitol building in Madison.
By Phil Gasper and Sarah Blaskey
Downloading PDF. Please wait...
Tuesday 01 March 2011

The battle between Wisconsin’s unions and the state’s Republican governor Scott Walker moved to a new level on Saturday when over 100,000 people marched and rallied in support of union rights at the State Capitol building in Madison.

Walker has used a $137 million deficit in the current budget as an excuse to launch a full-scale attack on public unions.

But Walker’s attack—part of a national Republican strategy—has sparked a massive and unprecedented class response.

“Healthcare workers, teachers, and others need a chance to survive,” says Madison teacher Travis Tangen. “Forty years of things slowly eroding, and this is the boiling point.”

Since the middle of February there have been daily demonstrations at the building that have mobilised tens of thousands of union members and their supporters, including thousands of students from the University of Wisconsin (UW).

According to UW graduate student Jamin Dreyer, “The bigger issue is inequality among people in America. It’s bigger than the university, it’s bigger than Wisconsin—it’s really a global issue of the haves and have-nots.”

Many banners at the demonstrations have compared Walker to deposed Egyptian dictator Hosni Mubarak, and activists in Egypt have sent solidarity greetings to the Wisconsin protests.

Madison teachers staged a four-day “sick out” to join the demonstrations, which have had strong support from private sector as well as public sector unions. Firefighters in full uniform have marched everyday.

Protesters have also maintained a round the clock occupation of the Capitol, with many hundreds sleeping in the building every night.

Even corrections (prison) officers and cops have joined the protests. On Friday, off-duty police, wearing “Cops for Labor” T-shirts, gave speeches inside the occupation and joined the sleep-in.

The protests have led all 14 Democratic state senators to leave Wisconsin, depriving the Senate of a quorum and blocking Walker’s legislation for the time being.

But Walker is not backing down and is threatening to announce mass lay offs of state workers. In response, the Wisconsin South Central Federation of Labor has passed a resolution backing the possibility of a general strike.

Whatever happens next, the events in Wisconsin have already revived the US labour movement, setting the stage for significant confrontations as governments at the federal and state level, led by Democrats as well as Republicans, continue to implement cuts.

“The mood has changed,” says Madison union activist Mike Imbrogno. “There’s been a one-sided class war in the US for decades. Now our side is fighting back.”

Gillo Pontecorvo: ‘My film shows what can happen when people unite’

The world's eyes will be on London 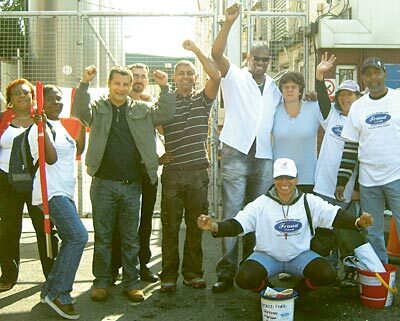