This article is over 11 years, 9 months old
A very important case for every trade unionist and activist is taking place in an unremarkable Newcastle office building.
By Charlie Kimber
Downloading PDF. Please wait...
Saturday 27 March 2010

A very important case for every trade unionist and activist is taking place in an unremarkable Newcastle office building.

Sacked nurse Yunus Bakhsh is taking the Northumberland Tyne and Wear NHS Trust to an employment tribunal (ET). It is the culmination of three and a half years of Yunus battling to save his job and win justice.

An extraordinary amount of evidence has built up. Each of the main figures at the ET must constantly dive between six giant lever-arch files full of documents.

Despite tens of thousands of pages of background material, the issues at stake are essentially simple:

Documents presented at the tribunal showed that Kerry Cafferty, Heather Stephenson and Michael Dodds gave statements to management that were used in the disciplinary case. They were allowed to be anonymous, and Yunus was denied their names, until this month.

The three made their statements after their Unison union branch had decided to back Yunus in his campaign against his sacking. The same three made similar allegations to Unison, which were later used to remove Yunus from union office.

The tribunal also heard that statements had been gathered from a wide range of witnesses for use in management’s investigation. But three statements were omitted from the final report – at least two because the witnesses refused to sign the testimony they were supposed to have given.

Last week Roy McLachlan, the Trust’s then chief operating officer, gave evidence over three days about the key issues. He was asked why Yunus was not given all the statements gathered by the investigation, despite the disciplinary procedures clearly saying everything must be provided.

He was further pressed on why anonymous witnesses had been allowed even though, as Yunus’s barrister Robert Askey said, the Trust’s “policy is silent on this issue”.

McLachlan replied that there were some areas where common sense was an authority to go beyond the rules laid down.

He was then asked why, at one point, the disciplinary hearing against Yunus had been suspended for 145 days to allow a race grievance to be heard. It was then restarted with what Askey called “incredible speed” and with no possibility of delay despite Yunus’s serious illness.

McLachlan agreed that this was a “particularly difficult decision” and “less than ideal”. Nevertheless he had to balance the interests of other witnesses who had been suffering stress. However, he was unable to provide any evidence of this.

Askey said that Yunus’s opportunity to put forward his case had been “irredeemably disadvantaged” by not being able to present his own arguments or question witnesses.

It was particularly damaging, he added, because at an earlier hearing Yunus had been told he could question witnesses at the employment tribunal!

The tribunal will continue until Easter, restarting on 19 April. A verdict from the three-person panel – a union representative, an employers’ representative and a judge – is expected in the week after the restart.

Yunus was scheduled to give evidence himself on Wednesday, Thursday and Friday of this week. Every message of support and donation he gets for legal expenses will help his case.

It is not a common experience for trade unionists to actually get to an ET hearing and then win.

For race discrimination just 3 percent went to a hearing and were successful. It is also very expensive to assemble legal advice, and Yunus’s case is unusually lengthy.

We cannot allow trade unionists, particularly black ones, to be picked off and condemned through anonymous letters and witnesses.

We cannot allow activists to be picked off by the “evidence” of those who frequent fascist websites. Procedures must not be pushed aside when it suits management. 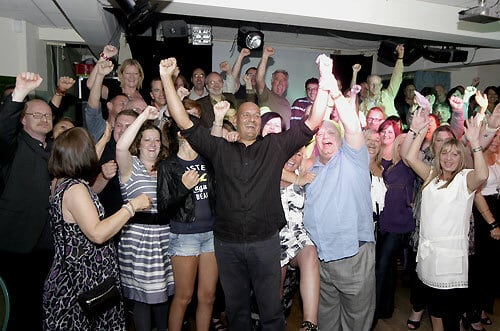 Yunus Bakhsh: The fighter who refused to go down