A referendum won, but Egypt’s Mursi is still on shaky ground

This article is over 9 years, 5 months old
Egypt’s president Mohamed Mursi won a majority with 64 percent of the vote in last month’s referendum on his new constitution.
By Judith Orr
Downloading PDF. Please wait...
Monday 31 December 2012

Egypt’s president Mohamed Mursi won a majority with 64 percent of the vote in last month’s referendum on his new constitution.

But this was not a sign of mass enthusiasm for the move. Turnout was 32 percent—much lower than in the last elections for president.

Egypt’s capital Cairo has a population of 20 million and the majority there voted no. The Nile Delta governorate of Gharbiya, which includes the vast working class industrial area of Mahalla, also voted no.

The vote followed several weeks of mass protests across Egypt in opposition to Mursi’s plan to enshrine pro-business and pro-army policies.

Hundreds of thousands beseiged the presidential palace. Army barricades and the palace walls became murals of anti-government graffiti. Mursi was forced to come to work through the back door.

Mursi is now trying to regain control but he faces serious problems. There are tensions at the top of the Muslim Brotherhood. Mursi’s deputy Mahmoud Mekky resigned last month.

Meanwhile the Egyptian pound fell to its lowest level in eight years during the referendum. And Mursi is under pressure from the International Monetary Fund to re-impose price rises on basic commodities. He postponed the changes to help win the vote.

There are widespread accusations of vote rigging. Thousands of voters demanded to see the ID of those who sat at polling stations. This is something that would never have happened before the revolution.

“He faces an opposition that has seen new forces join it. Greater than ever numbers of Christian Copts are now becoming politicised. Mursi and the Brotherhood have been shocked by the extent of the opposition.”

Workers and the poor still have expectations that the regime will bring improvements in their life. But Mursi is only promising price rises and austerity.

The working class has not joined this new wave of struggle as a collective—although strikes have broken out since the result was announced.

The independent union federation produced two million leaflets explaining how anti-working class the new constitution is. They were given out in workplaces.

“The mistake Mursi has made is that he has shown the sort of attacks he would like to make—a huge price rises on cigarettes, for example,” said Sameh.

“But he wasn’t strong enough to push them through. He dropped the price rises, but he will come back to them. This will lead to more struggles. The constitution can’t stop this process.”

“We will hopefully be able to resist the attempts of the Brotherhood and their big business allies to pass laws which benefit them.”

“It’s like we got rid of one bad ruler and now we have another in his place. The revolution didn’t ask for this.”

Mireille, an early voter at a polling station in central Cairo

Akram, who works near Tahrir Square 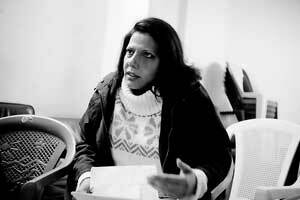