Activists in Egypt need our support

The prosecution represents a worrying new development for anti-war activists in Egypt. Like tens of thousands of others, Ashraf took part in the massive anti-war demonstrations of 20 and 21 March in Cairo. When they arrested him on 19 April, state security officers seized video footage of those protests, which ended in brutal repression and mass arrests.

The five activists are also accused of ‘damaging the prestige and status of the state’ by contacting international human rights organisations. Ashraf and his co-defendants are the only anti-war activists charged with serious offences. Under Egypt’s emergency laws they could face years in prison if convicted.

The activists’ defence campaign believes that the case is politically motivated. A statement signed by 21 civil society groups says that the prosecutors aim ‘to send a threatening message to political activists and groups in Egypt’. Egyptian activists need the support of our movement.

Write, email or phone the Egyptian president Hosni Mubarak, the Public Prosecutor and the Egyptian Ambassador.

Write to your MP and ask him or her why the British government is still backing a regime which denies its citizens their basic democratic rights.

Send messages of support from your trade union branch or community group to [email protected] and they will forward them to Ashraf Ibrahim’s defence campaign.

Egyptian revolution is a cry of rage against injustice 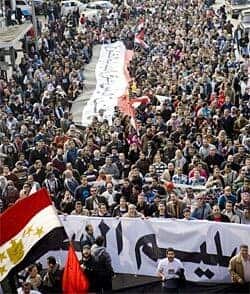