A racist, sexist clampdown on beaches is polarising France.

Around 30 resorts had banned bathers from “ostentatiously” covering their bodies by last weekend. As well as the “burkini” this has been applied to Muslim women wearing headscarves or shawls.

This follows years of restrictions on Muslim women’s right to wear what they want.

For some the burkini ban is an opportunity to increase this repression and the racism it’s rooted in.

Former president Nicolas Sarkozy, seeking the Tory nomination in next year’s presidential election, said, “Wearing a burkini is a political, militant act. Not doing anything would make France appear weak.”

But even many of those who supported previous measures were horrified.

Prominent ministers rapidly distanced themselves from Valls’ remarks and the burkini bans.

The Collective Against Islamophobia in France (CCIF) is campaigning to overturn the bans. It has reported receiving lots of messages of support for the women—including from people who oppose the wearing of headscarves.

One example was Marie-Aude. Despite “not agreeing with” the wearing of headscarves she was “shocked” at “the harassment these women are getting from the media and police”.

The youth organisation of the PS—which defied the government over its attack on workers’ rights this year—pledged to fight the bans.

They went in the sea fully clothed with banners saying “no to Islamophobia” and “no to the burkini ban”, then marched on the mayor’s office chanting, “It’s for women to decide.”

NPA activist Sellouma told Socialist Worker, “We were up in arms about the way Muslim women are being treated. This indignation pushed us to action.”

France’s top constitutional court ruled on Friday of last week that such bans were “clearly and seriously illegal”. The ruling, upholding a complaint from CCIF and the League of Human Rights, was a victory. But it’s only a start.

Formally it only directly applies to one town. Four mayors rushed to say they would exploit this technicality. They may drag it out until parliament debates a nationwide burkini ban in September.

Both main parties are divided. Tory frontrunner Alain Juppe opposes it, Sarkozy is strongly for it. Leading PS figures oppose it, but Valls ominously said the court ruling “doesn’t end the debate”.

The dangers are clear. Florian Philippot, a vice president of the fascist Front National, seized on the debate to call for the Jewish kippa to be outlawed in public too.

But there is also an opportunity to build on the backlash and start to turn the tide.

Sellouma said, “The pressure to act came from Muslim activists who were the first to move.

“It will take united work to beat these discriminatory laws. In the days ahead we need to think about how to go on the offensive against Islamophobia.”

Racist attack based on lies

He called them “a manipulation”. Senior journalist Olivier Siou even accused the woman of laying a “trap” and “provoking” police.

The woman who filmed the incident said, “It’s terrible that it’s come to this. Do you really think women come to swim with their children wearing bombs under their clothes?”

The Socialist Party mayor of Sisco on the island of Corsica is one of those vowing to uphold the ban. Incidents there earlier this month have been used to justify the bans for the sake of public safety.

Around 500 people gathered in Corsica’s capital Bastia to march on an immigrant area. They turned over cars and shouted “to arms—this place is ours!” A similar mobilisation had trashed a mosque nearby on Christmas Day.

The mob was reacting to a brawl in Sisco, supposedly after Muslim men had attacked people for taking photos of a woman in a burkini.

But as the press circulated this story witnesses rapidly debunked it. There never even was a burkini. The mayor banned them anyway, legitimising the lies told to justify racist violence. 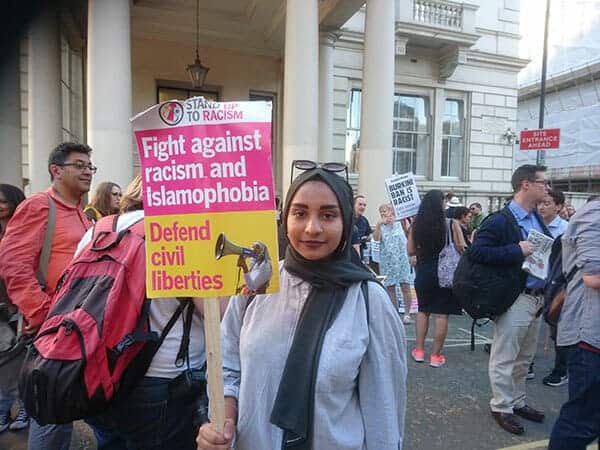 Haadiya joined the protest against the ‘birkini’ ban in London (Pic: Socialist Worker)

Hundreds gathered outside the French embassy in London last Friday chanting, “Say it loud, say it clear, Muslims must not live in fear,” and, “Our bodies our lives, our right to decide.”

They joined a protest called by Stand Up To Racism (SUTR) and Muslim Engagement and Development. Many were young Muslim women. Student Enaab told Socialist Worker, “The hypocrisy really gets me. People say I must’ve been forced to wear my headscarf. But it’s this law that forces women to dress a certain way.”

In Birmingham, Amina told Socialist Worker, “Once they’re telling us how to dress, what next—how to eat? You already hear complaints against halal food—will they ban that? The horrifying thing is this is just over the Channel. If it becomes the norm over there, could it end up happening here? It’s really scary.”

State Islamophobia isn’t just a French issue—and nor is resistance.

On the London protest, student Haadiya said, “We face Islamophobia from all around us. A lot of people are afraid to speak out for fear of being seen as ‘extreme’. So it’s really important we take a stand when they try to limit our freedom of speech.”

SUTR joint secretary Weyman Bennett underlined the importance of the coming SUTR conference on Saturday 8 October. “We can win this if we stand together,” he said. “We need everyone here to become a leader of SUTR in their workplace or school.” 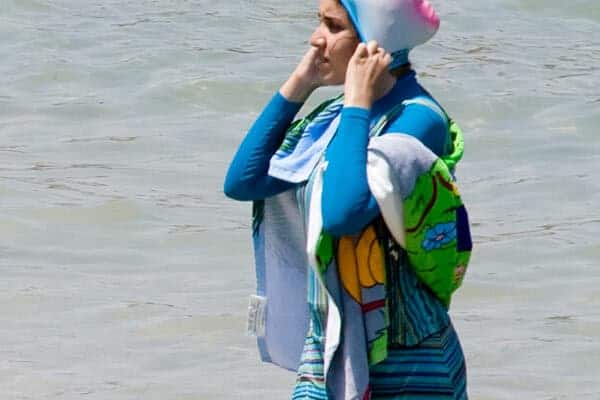 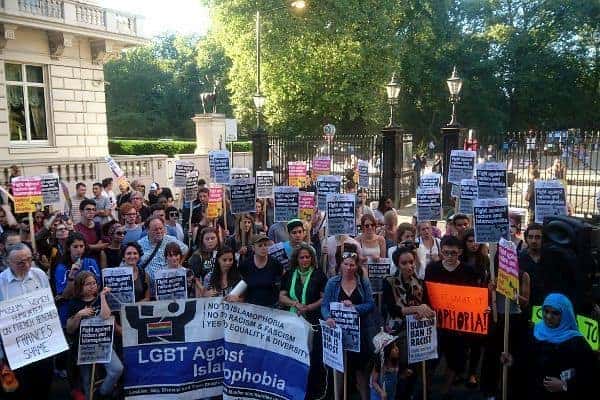