This article is over 10 years, 8 months old
Ahdaf Soueif, an activist and author based in Cairo, spoke to Socialist Worker
Downloading PDF. Please wait...
Monday 28 November 2011

‘The new government is a joke. People are more determined than ever that Scaf should not be in government.

In February the military was forced to jettison Hosni Mubarak. Now they know that if they fall it’s really the end.

So the fight is more vicious.

My nephew, activist and blogger Alaa Abdel-Fattah, was arrested in October and he refused to recognise the military court. He is still in prison. In protest, his mother, my sister Laila, has been on hunger strike since. Yet she is still in the heart of the struggle.

Last night we were both in Tahrir. A row erupted about street vendors.

Some people wanted to kick them all out, saying they could be infiltrators and were there to make money.

My sister defended their right to make a living and a big debate took place.

In the end people accepted they had a right to be there. Every step of this struggle is an education.

This is revolution phase two. I understand why people trusted Scaf at first.

But you don’t often get a second chance. Now we have—and we are in a better position than before.’ 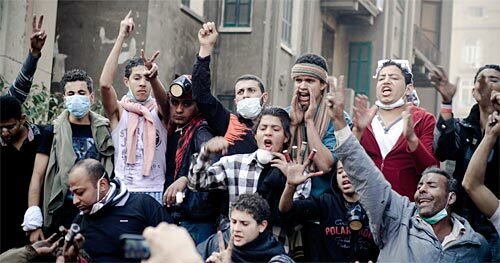 Egypt in revolt against army