All roads lead to Florence in autumn

This article is over 19 years, 11 months old
THE EUROPEAN Social Forum will be a massive gathering of activists from many different movements. It will be held in the Italian city of Florence from 7 to 10 November this year. The alliance between Tony Blair, Spanish leader Aznar and Italian prime minister Berlusconi aims to drive Europe further to the right.
Downloading PDF. Please wait...
Saturday 25 May 2002

THE EUROPEAN Social Forum will be a massive gathering of activists from many different movements. It will be held in the Italian city of Florence from 7 to 10 November this year. The alliance between Tony Blair, Spanish leader Aznar and Italian prime minister Berlusconi aims to drive Europe further to the right.

They have responded to the rise of the fascists by embracing right wing ideas on immigration and crime. The European Social Forum provides the chance to build an alternative to neo-liberalism, racism and war. In the mornings there will be huge conferences. They will focus on issues like fascism, war and refugees.

In the afternoons a broad range of organisations and networks will have their own forums and events. Every evening will be filled with cultural events, music and film. There will also be demonstrations through Florence. One demonstration in support of immigrants has been organised for the day before the forum begins, 6 November. There are plans to hold another demonstration against neo-liberalism and war.

The forum will be an opportunity to plan Europe-wide actions against war and in solidarity with Palestine. Preparations will also be made to protest against the meeting of the G8 which will take place in Paris in the summer of 2003. Support for the European Social Forum is growing in the unions. The Northern and London regions of the Unison union have voted to send delegations to Florence.

A motion in support of the forum is also being presented to Unison’s national conference.

The Eastern Region of the firefighters’ union, the FBU, is sending a delegation. The London Region of the MSF section of the Amicus union has agreed to contribute £500 towards the cost of people going to the forum. You can register for the European Social Forum from 1 June. For information contact Globalise Resistance. Phone 020 8980 3005 or go to www.resist.org.uk

THE MOVEMENT to create a European Social Forum was given a boost at the Globalise Resistance conference in London last Sunday. Around 350 people heard a range of speakers discussing subjects from Palestine to fascism, and from imperialism to radical art. But the key sessions of the conference were devoted to campaigning for the forum.

Luciano Muhlbauer from the Italian Social Forum explained why the event would be so important: ‘Politicians say the rise of the far right racist parties means the death of left wing politics. The leaders of the centre-left parties are giving in to the right. But millions of Europeans suffer every day from the results of the neo-liberal policies. The crisis of the traditional left has meant that new possibilities have opened up, and new social movements are rising.’

He told the conference that the forum aimed at building solidarity between all Europeans, including Eastern Europeans, and with people from south of the Mediterranean. Chris Nineham from Globalise Resistance explained why people had lost faith with official politics:

‘All the centre-left parties support Bush’s war drive. But the idea of war terrifies millions of people round the world. In France, after seven years of centre-left government, two million people are unemployed and whole swathes of services have been privatised.’

Chris explained how the big anti-capitalist demos had acted like detonators, setting off local movements. For example, in the Spanish city of Seville protests have been called against a European Union meeting in June. Already Spanish unions have called a general strike to coincide with the protests.

The Globalise Resistance conference enthusiastically agreed to host mobilising meetings in every town and city across Britain to build for the European Social Forum.

THE IRISH election results mean the crooks in Fianna Fail are back in power. However, for all the talk of a ‘triumph’, their vote rose just 2.2 percent on the 1997 election. The second bosses’ party, Fine Gael, saw its vote slump over 5 percent, and it lost over 24 seats.

Most of the media say Fianna Fail’s success shows that everyone is sharing in the boom of the ‘Celtic Tiger’ economy. Between 1994 and 2000 the Irish economy did grow at an average rate of 9 percent a year. But it was the rich who grabbed the wealth.

The share of the economy going to capitalists and property speculators grew from a third in 1987 to over a half in 2000. Taxes on profits are among the lowest in the world. Workers paid for this by putting up with some of the worst public services in Europe and accepting wage restraint.

The depth of opposition to the political establishment was shown by the fact that 25 percent of people voted for non-establishment parties-Sinn Fein, the Greens and independents. Unlike in the last election, most of the 14 independents who won were to the left of the main parties. They included five hospital campaigners. The Green Party won six seats (up from two last time) and Sinn Fein five (up from one last time). Sinn Fein’s campaign was largely based around social issues such as housing and health-although it also called for an intensified war against drugs and, in some areas, more police on the streets.

Sinn Fein did particularly well among young people and in some of the working class areas of Dublin. Because the Labour Party has turned its back on any sign of working class radicalism it failed to attract the votes of people who are angry at Fianna Fail.

The return of Fianna Fail does not mean there will be ‘social peace’ ahead. The government is determined to press ahead with privatisation.

THE SOCIALIST Party and the Socialist Workers Party fought to win a hard left vote. With the exception of Socialist Party candidates Joe Higgins (21.5 percent and re-elected) and Clare Daly (12.5 percent), their vote was squeezed by the rise of Sinn Fein.

Nevertheless, in areas where the socialist parties had a record of local campaigning they established a small electoral base for the future.

OVER 100,000 people joined a protest in Madrid, Spain, last weekend. It took place outside a gathering of government leaders from Latin America, the Caribbean and Spain. The demonstrators’ main slogans were ‘No to the exploitation of Latin America’ and ‘Against a Europe of capital and war’. The demonstration was another sign of the anti-capitalist feeling in Spain, coming after 500,000 marched in Barcelona.

This came after it called its first serious strike campaign for seven years. The employers’ original offer was 2 percent. The IG Metall victory has important repercussions across the European countries that are part of the euro.

The European Central Bank and big business are worried it will encourage other workers, in Germany and the rest of Europe, to push for higher wages. They are threatening to respond to that by sackings and higher interest rates. The victory is also a challenge to German leader Gerhard Schršder, who has preached a New Labour style partnership between the unions and the employers.

‘MASS ACTION is inevitable and unavoidable. We have come to a stage where non-violent action has to be taken. People are prepared to protest against this illegitimate government.’ This message from Morgan Tsvangirai, leader of the Zimbabwean Movement for Democratic Change, shows there is turmoil ahead. Tsvangirai has pledged that there will be action within a month. Since the elections in March the MDC has wavered between negotiating with President Mugabe and threatening to call protests on the streets.

Talks with Mugabe have led nowhere, and the MDC leaders can feel the immense pressure from below to do something about his rule. Mugabe’s hollow claim to stand for ordinary people over the land issue was exposed last week when 12,000 poor black families were evicted from land owned by white farmers, a cabinet minister and the church. 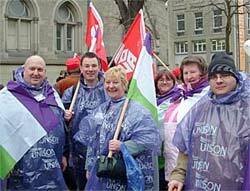 Slowing down Bolkestein's race to the bottom