Anger at sectarian killings fuels fury with the state

The British press has blamed bloody killings last week in Quetta, Pakistan, on “religious fanatics”. This does nothing to explain why they took place.

It isn’t religion that lies at the heart of this violence. It is national oppression and a struggle for control of one of the world’s largest countries.

Quetta is the capital of Balochistan. Balochistan is geographically the largest of Pakistan’s four provinces, but with just four million inhabitants it has the smallest population.

The Pakistan army invaded Balochistan in 1948 to fully integrate it into the new state.

Since then its large raw material resources have been ruthlessly exploited—yet none of the profits have been used to meet local needs.

Now there is a new battle for control.

A massive new port at Gwadar on the Balochistan coast is being developed with Chinese finance.

This will open up a trade route for the exploitation of natural resources including oil, copper and gold in Afghanistan and other parts of the region.

The increased need for control has led to increased violence against Baloch nationalists. Pakistan’s security and intelligence agencies carry out daily “disappearances”.

Now that Nato has been forced to negotiate with the Taliban in Afghanistan, the fight is on over who gets what after planned troop withdrawal next year.

US and British efforts to strengthen their bargaining position with drone attacks are creating enormous anger.

This is partly directed against Pakistan as an ally of Nato.

This would cost huge numbers of lives and probably be counterproductive in trying to weaken the Taliban.

In this situation the Taliban is winning fresh recruits—and the many minorities in Pakistan have become targets for bombings. Such attacks flow directly from divide and rule tactics that use nationalism and sectarianism against minorities.

Across Pakistan, there is a wave of anger against sectarianism and the bloody attacks on Shia Muslims. Protests, roadblocks and strikes have taken place in every city.

In Quetta relatives of the dead have refused to allow the 86 victims to be buried. They are continuing a sit-in in sub-zero temperatures in the centre of the city.

Prime minister Raja Pervez Ashraf flew to Quetta to announce the dismissal of the provincial government and the imposition of emergency rule.

Pakistan’s ruling class is showing itself ever more incapable of ruling. Anger among ordinary people is growing—not only over sectarian killings but also over inflation, power cuts, corruption and the incompetence of their rulers.

A huge protest took place in the capital Islamabad on Monday of this week. The moderate cleric Tahirul Qadri called the demonstration.

He has called for little more than the proper implementation of the constitution and an end to corruption. Yet he has scared the political establishment.

Pakistan’s rulers know that it only takes a spark to set off a movement that could challenge their power.

Such a movement can succeed if the huge Pakistani working class unites against nationalism and sectarianism. 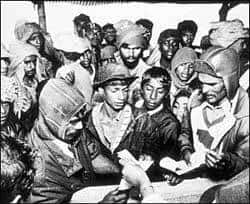