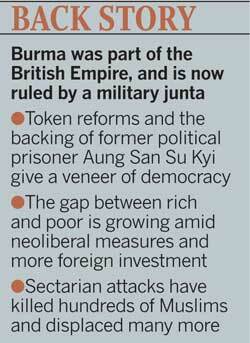 What’s behind the bloody attacks on Burma’s Muslim Rohingya minority?

More than 650 people were killed and 80,000 displaced from the state of Rakhine last June. There was more violence in October, and now a third wave of anti-Muslim rioting is building in Meiktila town, Mandalay.

This is not a result of some “natural” antagonism between communities. Burma’s rulers have been sponsoring racism ever since the British Empire.

Different ethnic groups had co-existed peacefully in what is now Burma for centuries.

But the British had perfected the tactic of divide and rule in their colonies.

They had pet academics like JS Furnivall. He argued that in south east Asia there was a “plural society” where ethnicities never mixed and only met in the marketplace.

In fact none of this was “natural”. Colonial powers restricted various ethnic groups to different professions, and forced them to live in separate parts of the main towns.

Fear of a cross-cultural revolt by the local people was uppermost in their minds.

When the mainly Indian workforce on the docks struck in 1930 the British drafted in Burmese scabs, resulting in violence against Indians.

An estimated 200 people were killed.

The Burmese nationalist movement Dobama Asiayone was formed in the same year out of riots against Indians, Muslims and the Chinese.

Its ideology was of extreme Buddhism and Burmese supremacy.

Its leader Aung San argued that of Burma’s ethnic groups “only Burmans and Shans could really be considered as having a nation”.

But in most villages, the local moneylenders were themselves Burmese.

Aung San’s army was also accused of atrocities against the Karen people during the Second World War.

Today Burma’s ruling class uses racism to divert attention from the lack of democracy and the growing gap between rich and poor.

In 1991 police mounted massive repression against Muslim Rohingyas in Arakan. In 1997 the military mobilised extremist Buddhist monks to attack Muslims in Bago.

As Burma is opened up to outside investment and neoliberalism, Muslims are blamed for poverty for “controlling” businesses.

Progressive Buddhist monks played a prominent role in mass mobilisations against the military regime in 1988 and 2007.

But the military supports far right Buddhist groups such as the “969” organisation that targets Muslims. This is run by a monk known as Wirathu, close to former general Khin Nyunt, who used to run Burma’s military intelligence.

Aung San’s daughter, Aung San Su Kyi, has sided with the military on the issue of violence against Muslims.

She even claimed that the Rohingyas were not citizens of the country.

Su Kyi is the key figure in providing legitimacy to the bogus democratic “reforms” taking place in Burma.

She is a firm supporter of neoliberalism and the multinational firms. She was recently heckled by villagers who face the loss of their land to a big mining project.

Far from being neutral, the Burmese state is a weapon of the ruling class and an obstacle to peace and democracy.