This article is over 9 years, 5 months old
Everything is to play for as both workers and the rich take to the streets against rocketing prices, writes Suzie Wylie
Downloading PDF. Please wait...
Saturday 12 January 2013

Anger is growing in Argentina against the government of Cristina Fernandez de Kirchner—and two very different social movements are articulating it.

One is typified by the well-dressed upper and middle classes demanding the right to use dollars and opposing the government.

Hundreds of thousands in major cities took to the streets in “cacerolazo” protests on 8 November. Their bitter rage was not just directed at the government, but against the poor who have enjoyed some limited social protection.

Some white collar workers joined the march, and there were demands that the left could sympathise with—such as against a hated tax on salaries. But unlike the popular cacerolazos of the 2001-02 crisis, this was neither progressive nor spontaneous.

The main themes revolved around preserving the comforts of the upper and middle classes. The criticism of the government came from right wing politicians and media.

Two weeks later workers took back the streets and put progressive demands back on the agenda. Several major unions called the first general strike for a decade, with demands including a higher minimum wage and the repeal of an “anti-terrorist” law that criminalises protests.

The capital Buenos Aires was practically deserted. Airports and railways were shut down, and large demonstrations blocked the roads into the cities.

The strike was uneven, but after a period of fragmentation and weak resistance to cuts it was an important success for the working class. It was a jump forward in organisation and combativity.

This is a whiff of the struggle to come, as social and political tensions grow in the face of possible economic stagnation or recession.

Daily life is becoming a struggle for millions of Argentinians. There has been some recovery since the economic collapse of 2001, but living standards and employment levels have not returned to pre-crisis levels.

There is increasing evidence of slowdown. The growth model that the government pursues looks weak. It relies on exports of agricultural goods, such as soya, and on international financing for mining projects to strip out natural resources.

The rhetoric of the government’s “national and popular” project is that it seeks to tackle economic inequality and level out social differences. But constant price increases and depressed wages are creating alarming levels of poverty.

The level of inflation is principally due to mark-ups on consumer goods in order to keep up profitability for big businesses. The gap between government rhetoric and reality grows starker by the day.

For example, official statistics say it is possible to live on six pesos a day. But six pesos now buys just one pastry or half a cup of coffee. Lack of investment in transport led this year to a tragic train crash in which 51 people were killed.

Now support for Fernandez is waning. The social composition and political direction of the two movements mark very distinct alternatives. The cacerolazo offered no genuine solutions to the economic crisis.

Worried sections of the middle class are starting to act as the infantry of a right wing opposition that has been in political disarray.

But the unity of all workers, the unemployed and social movements for the redistribution of wealth can offer a real alternative. 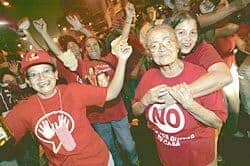 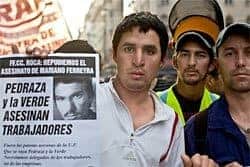