The first time I heard of Ariel Sharon was the evening of 16 September 1982. I was ten and lived with my family in the Sabra and Shatilla refugee camp on the outskirts of Beirut.

Our camp was surrounded by Israeli troops and their Lebanese Phalangist fascist allies. All our fighters had withdrawn from the camps under a peace deal that ended the Israeli siege of the Lebanese capital. We were defenceless but our safety was guaranteed by the international community.

I did not know who Sharon was at the time, but his name filled all Palestinians with fear. In August 1953 his elite forces raided the al-Bureig refugee camp in the Gaza Strip and killed up to 50 refugees. In October of that year he organised another massacre, this time of 69 civilians in the West Bank village of Qibya.

His soldiers would often slaughter people they captured.

During the 1967 war he executed over 100 Palestinian prisoners. Now he was leading the charge by the Israeli army into Lebanon. In September 1982 he reached our camp.

People began to panic, but none of us could have foreseen the horror he would unleash on us over the next 36 hours.

The first to die were the people caught trying to escape the cordon around our camp. Then we started to hear that representatives from the civilian committee who went to negotiate were not returning. That evening the Israelis and the Phalangists started to fire on the camp from the sports stadium.

A neighbour came to our house with her two daughters. She was screaming that the Phalangists had entered the camp and killed her two sons.

All night we could hear the sound of death around us as family after family were killed in their homes.

My brothers fled to the Gaza hospital on the edge of the camp hoping to find refuge. My mother and I found refuge in the mosque. My father decided to hide in the house.

Militiamen discovered us and marched us out of the camp. It was then that we saw the Israeli soldiers. They taunted us.

As the militiamen and the Israelis marched us along the main road we were joined by other survivors. Among them was a friend and her family.

With her was a neighbour who was trying to stop the bleeding from a large wound in her stomach. She later died.

A disabled man called Abu Mohammed al-Dokheh was forced to march with us. He was too slow so they killed him. My friend’s father tried to escape but they shot him as well.

During this march I came across the body of my cousin. She had been raped and was lying naked in the street. Her father was lying dead in an alleyway. The rest of her family were killed on their doorstep.

A women tried to flee down an alleyway and they caught her and beat her to death. People began to panic as we realised we were all going to be murdered.

Two Israeli soldiers came up to my mother and me. My mother pleaded with them in Hebrew. One of them said, “Run or you will die.” We ran and escaped to the Gaza hospital.

The hospital was full of people seeking shelter. But the staff said they could not protect us. They were all later murdered.

We were crammed into cars and escaped. My father and brothers survived, but were arrested and handed over to the Lebanese army. Many people disappeared after they were arrested.

Politicians and the media are now presenting Sharon as a man of peace. But for me he will always be the butcher of Beirut. 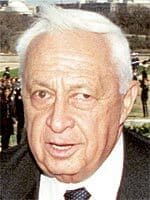