This article is over 8 years, 5 months old
Jaouhar Bani and Anne Alexander look at what lies behind the new wave of revolt sweeping Tunisia
Downloading PDF. Please wait...
Tuesday 30 July 2013

Hundreds of thousands of people took to the streets of Tunisia last week in protest at the assassination of Mohamed Brahimi. Brahimi was a leader of the Popular Current and vocal critic of Tunisia’s Islamist-led government.

The UGTT union federation, which represents around 500,000 workers, called a general strike on Friday of last week over the killing. Flights were grounded while transport and government services were brought to a halt across the country.

Hundreds of thousands joined evening marches calling for the overthrow of the government. They chanted the slogan of the 2011 Revolution, “The people want the downfall of the regime”.

Brahimi is the second leading opposition figure to be gunned down this year. Chokri Beleid, a well-known figure in the left wing Popular Front, was shot dead on his doorstep earlier this year.

Secular and left wing opposition parties have accused the Islamist-led government of complicity in both murders. Mokhtar Ben Hafsa, a teacher and activist in the Popular Front, joined up to 100,000 mourners at Brahimi’s funeral.

He told Socialist Worker, “There were chants calling Ennahda’s leader, Rached Ghannouchi, a murderer and a collaborator with imperialism.

“Young people gave out leaflets calling for people to join a sit-in outside the Constituent Assembly.”

Up to 30,000 people gathered outside the Assembly, expressing solidarity with opposition MPs who walked out in protest at Brahimi’s murder. The protests were strongest in impoverished parts of central Tunisia.

Mohamed Sghaier, spokesman for the public sector unions in the UGTT union in Kasserine told Socialist Worker, “The response to the strike was very strong.

“Around 80 percent of government institutions in Kasserine were shut down. And 5-7,000 joined the demonstration around the town.”

Recent events in Egypt have sent shockwaves through Tunisia. Ennahda’s electoral victory has turned sour for many Tunisians, as the new government has failed to turn hopes of social justice into reality.

The success of the “Rebel” signature campaign against the Muslim Brotherhood in Egypt inspired a number of similar initiatives in Tunisia. The polarisation between Islamist government and secular opposition is also being repeated.

Committees of a Popular National Salvation Front involving the UGTT, the Popular Front and Nidaa Tunis have sprung up in many places.

Nidaa Tunis is a political party founded after the 2011 revolution by former prime minister Beji Caid el Sebsi. Its participation is allowing members of the former ruling party to mobilise support under the cover of opposition to Islamism.

At this stage, the Tunisian military is unlikely to directly attempt to recreate core elements of the old regime. Organised workers must seize the initiative through spreading and developing strikes against Ennahda to deepen the revolution. 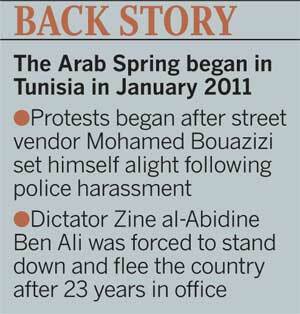