This article is over 9 years, 3 months old
The car bomb that killed the head of Lebanese intelligence in Beirut on Friday of last week has dragged the country further into the Syrian crisis.
By Simon Assaf
Downloading PDF. Please wait...
Tuesday 23 October 2012

The car bomb that killed the head of Lebanese intelligence in Beirut on Friday of last week has dragged the country further into the Syrian crisis.

Wissam al-Hassan was widely seen as serving the interests of Syria and its allies. The assassination touched off deadly gunfights between Sunni and Shia Muslim neighbourhoods. Militia checkpoints have also reappeared.

Tensions were growing before the attack. They are fuelled by sectarian parties that have been trying to recalibrate their interests to new forces rising in Syria.

The country has been in the grip of an economic downturn and growing social unrest that has left the ruling parties deeply divided.

The pro-Western “March 14” parties broadly support the Syrian uprising. They hope that the end of Bashar al-Assad’s regime will weaken its domestic opponents. They hoped Hassan’s assassination would lead to the fall of the pro-Hizbollah government headed by Najib Mikati.

In contrast the government and its supporters have lined up behind the Assad regime. These include right wing Christian—and once vehemently anti-Syrian—parties and an array of deeply sectarian organisations.

At the heart of the crisis is Hizbollah’s decision to send fighters to attack Free Syria Army rebels along the border with Syria.

Some of its fighters are also said to have been killed inside Syria in the fighting around Homs. The party and its allies have been implicated in attacks on supporters of the Syrian revolution in Lebanon.

Hizbollah enjoyed widespread sympathy for its opposition to Israel and its pledge not to use its weapons on “internal questions”.

Now its opponents have jumped at the chance to weaken the party. The assassination has left Hizbollah dangerously exposed and has further drained its popular appeal.

Lebanon has seen an unprecedented wave of strikes emerge from a popular movement modelled on the Arab Spring.

The evening before the car bomb the teachers’ unions had announced a new round of strikes over pay. The sudden turn towards sectarian confrontations is in danger of scuppering this movement.

Cameron warns on arms to Syria

Eyewitness from Syria: ‘Our mentality has changed’ 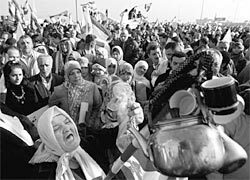