Baltimore rises up after death of Freddie Gray

The US city of Baltimore has erupted in riots following the death of 25 year old Freddie Gray. City officials called a state of emergency and announced a week-long curfew starting on Tuesday of this week. The National Guard said it could put 5,000 troops on the streets.

Freddie was arrested on 12 April after making eye contact with police and then running away. Mobile phone footage of his arrest shows him being handcuffed and dragged into a police van in agony. He asked for medical help several times before being put in the van, but paramedics were not called until after a 30 minute journey. He was put in leg cuffs in the police van.

Freddie died over a week later from a severe spinal injury and his funeral took place on Monday of this week.

Thousands of people have taken to the streets. Protesters chanted, “All night, all day—we’re gonna fight for Freddie Gray.”

Mostly young, black locals have fought pitched battles with tooled up officers—and used rocks to drive back police lines. Extra cops have been drafted in.

Baltimore mayor Stephanie Rawlings-Blake accused them of “trying to tear down what so many have fought for”. But the protests are an expression of rage at the death of yet another black person after coming into contact with cops.

The website Killed By Police estimates that US cops have killed 378 people so far this year. For 2014 that figure is approximately 1,100.

Officials have suspended six police officers who were involved in the case.

Last month officer Michael Slager was charged with murder after a video was released showing him shoot Walter Scott eight times in the back. His next court appearance is 21 August. 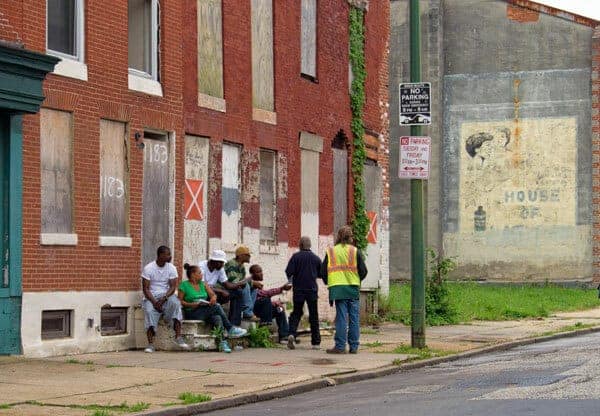 Baltimore - how poverty and police racism ignited a city