This article is over 9 years, 4 months old
A new wave of militant strikes by garment workers in Bangladesh is spreading fear in the government and among multinational clothing firms.
Downloading PDF. Please wait...
Tuesday 18 September 2012

A new wave of militant strikes by garment workers in Bangladesh is spreading fear in the government and among multinational clothing firms.

Several factories in the Ashulia district of the capital, Dhaka, are closed after workers demanded pay rises and the right to free independent trade unions. This follows a summer of action that spread to garment workers across the Export Processing Zones, and is now galvanising others.

Strikers are met with a typically brutal state response—the Rapid Action Battalion paramilitary police force, which is notorious for torturing, and on occasion killing, leading militants.

But repression isn’t working, says Mushtuq Husain of Dhaka’s Centre for Social Praxis. “Workers organise themselves clandestinely. So when they burst into protest, it seems like a bolt from blue.”

Mushtuq says that as soon as one dispute appears settled another explodes, leading bosses to close all the factories in a district rather than have the strike spread.

The falling value of wages, which are often just £20 a month, compared to rising prices is spark for many strikes.

“When the minimum wage was raised a little in 2010, it was far below the living expenses of a 2-member family. Now the meagre wage cannot meet the minimum living cost of even single member family,” says Mushtuq.

“Now, the striking garment workers are regularly being joined by workers in other sectors, including pharmaceuticals, transport, tea, and fuel tankers.”

Multinational clothing giants are so scared of the action that they are pleading with the government to again raise the minimum wage.

The boss of Swedish clothing giant H&M visited Bangladesh earlier this month. After visiting a plant and meeting prime minister Sheikh Hasina, he said, “We demand that the Bangladeshi government increase minimum wages and consider yearly wage reviews for the workers.”

Mushtuq is sceptical of global bosses’ claim to be on the side of the workers. “Western buyers, particularly the US ones, try to control the workers movement by funding few NGOs (Non Governmental Oraganisations). They want to stop leftists from organising the workers.”

Mushtuq says that they hope that allowing official trade unions into the factories will mean an end to the wildcat strikes. But with the spread of the garment workers’ militancy into other sectors, it seems that attempts to head of the growing wave of action may have come far too late.

Bank workers in the frontline of new strike wave 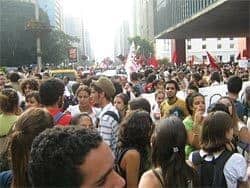