Surge in support for Melenchon’s left alliance in French elections

The real battles against neoliberalism and racism will come on the streets and workplaces
By Charlie Kimber
Downloading PDF. Please wait...
Sunday 12 June 2022 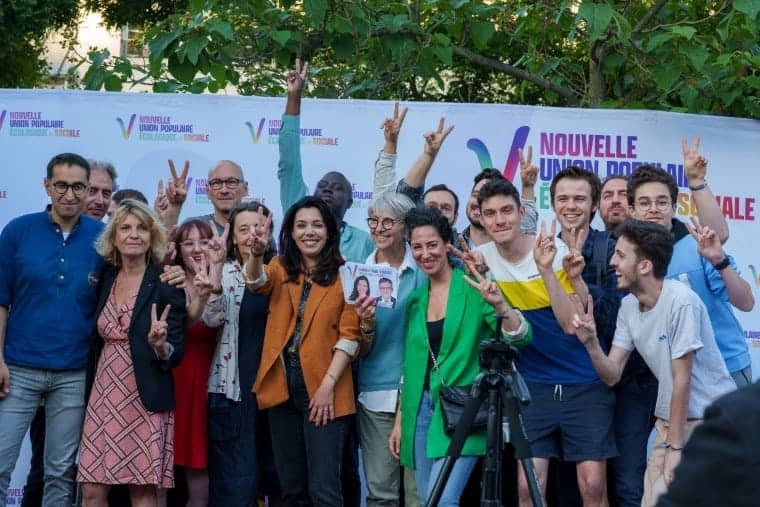 The first round of French parliamentary elections on Sunday showed mass support for a left wing alternative to neoliberal president Emmanuel Macron. It’s a huge shock to the whole political establishment and a bitter defeat for Macron.

The big winner was Jean-Luc Melenchon’s New Popular Ecological and Social Union (Nupes). After nearly all the votes were counted, the combined votes for the parties in this alliance were 26.1 percent, the highest of any political force.

“What we offer is another vision of the world, of society,” Melenchon told supporters before the poll. He added, “I’m not saying we will create a paradise from one day to the next, but we will put an end to hell.” As the votes were being counted, he looked forward to the run-off round of voting and said, “Nupes has come first. I call on our people to surge next Sunday.”

Macron’s Ensemble! (Together) coalition was on 25.9 percent, lower than Nupes. It’s a huge blow to Macron and the first time a president’s party has won less than 30 percent in such elections. It’s far from certain that he will win a majority in the 577-seat parliament after the second round.

Several cabinet ministers are likely to lose their seats. Already the hated education secretary Jean-Michel Blanquer has been eliminated in the first round.

Five years ago Macron’s party and its allies had 356 seats, but it faced fierce opposition when it tried to implement its authoritarian and anti working class measures. That could be even more true now.

The crushingly low vote for Ensemble underlines that Macron’s presidential election victory in April came from a desire to stop fascist challenger Marine Le Pen. It wasn’t a positive support for his ideas.

The fascist National Rally (RN) of Le Pen was on course to grab 19 percent on Sunday. This is a lot more than the 13.2 percent it took in 2017—and the party of the far right Eric Zemmour is also expected to take 4 percent.  The RN will have far more seats than last time.

However, its vote of 4.3 million was far fewer than the 8 million it had in the first round of the presidential election.

The general disenchantment with the whole political system meant that the turnout was just 47 percent, a record low for the first round of the parliamentary contest.

Revolutionary socialist Denis told Socialist Worker from Paris, “These results mean instability, a government without legitimacy. Things are speeding up in France. Everything has been dominated by elections, but now more direct struggles are going to come back.”

Nupes is made up of five parties including Melenchon’s La France Insoumise (France Unbowed) and the Labour-type Socialist Party, the Communists and the Greens. Melenchon gave the Socialist Party life support by welcoming it into his alliance. They took just 1.75 percent in the recent presidential elections.

The Nupes manifesto put forward some popular measures including lowering the retirement age to 60 and freezing the prices of essential goods. It promised investing “massively” in renewable energy and reintroducing the wealth tax that Macron removed.

The right tried to present this as wildly unaffordable. Finance minister Bruno Le Maire compared Melenchon to the late Venezuelan president by dismissing him as a “Gallic Chavez”. But many people thought it was entirely sensible, especially as the cost of living was voters’ number one issue at the polls.

Nupes results are a very welcome sign that there is a big audience for left ideas. But Melenchon is focused on elections, not the struggle in workplaces and the streets. With mainstream French politics in crisis, it’s the battles at the base that will be crucial.

How the system works

There is now a second round of elections next Sunday. A candidate can win in the first round if they receive at least half the share of votes cast, as well as the votes of at least a quarter of registered voters in the constituency. Particularly because of the low turnout, that is rare.

The candidate who gets the most votes in the second-round runoff becomes an MP. To reach the second round, candidates must receive votes from at least 12.5 percent of the registered voters. If only one of them achieves this, they’ll go up against the next best scorer. If none do, the top two will go up against each other.

Macron’s alliance is likely to win more MPs in the French election than its percentage vote in the first round would suggest. That is primarily because the left wing vote is more concentrated around fewer, mostly urban constituencies, compared with the more widely spread right wing vote.

Polling organisation Ispos predicted Macron’s alliance would win between 255 and 295 seats. This suggested there was a strong chance it could fall short of an absolute majority, which requires 289 seats. Nupes is through to the second round in over 500 seats. It could take between 150 and 190 seats, according to Ipsos. But the pollsters and the pundits have been wrong before. Another surge for the left, including some of those who abstained n the first round, could see a further political earthquake.

These elections are important for party funding. On top of what they receive in donations and membership fees, parties can collect state subsidies. If they pass the threshold of at least 1 percent of the vote in at least 50 constituencies they receive £1.42 per vote a year.

Fighting racism and fascism on the streets 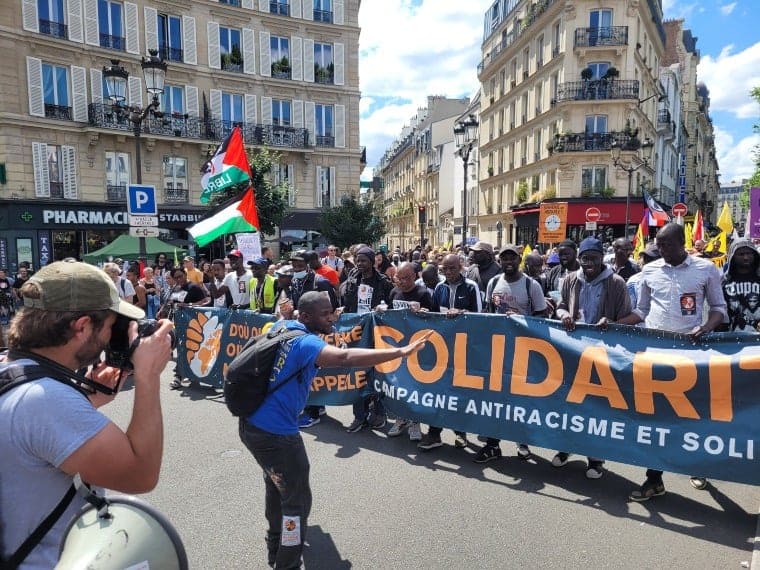 Thousands on the march against racism in Paris

Around 5,000 people joined a march against racism and the far right in Paris on Saturday. It was organised by the broad-based Marche des Solidarites, bringing together trade unions and campaign groups.

It included numbers of “sans-papiers”—undocumented migrants—and local anti-racist committees from the north of the capital and the suburb of Montreuil. Similar marches took place in Marseille, Bayonne, Poitiers, Amiens and Valence.

Some activists launched a feeder march to the main Paris demonstration to highlight the police killing of a woman named Rayana. The cops gunned her down last weekend—the fourth such death in four months. That toll included two on the night of the presidential election in April.

Rayana’s friend Inès said three officers on a mobile bike patrol had knocked on the driver’s window because he was not wearing a seatbelt. She said he drove on until he was blocked by traffic because he had no licence.

She said the officers then broke the car windows with their weapons and fired shots. “I thought my friend Rayana, in the seat in front of me, had passed out,” she added. “I tried to shout out her name several times at the top of my voice. Her body was limp and then I realised she had blood all over her neck.”

Jean-Luc Mélenchon told French radio, “It’’s not normal that we kill someone for failing to stop.” Macron’s present prime minister Elisabeth Borne said his remarks were outrageous and it was “irresponsible and unworthy” to insult the police.

Local trade unionists joined the feeder march through the neighbourhood, even though it did not have the authorities’ permission. They chanted, “The police kill, racism kills, fascism kills.” 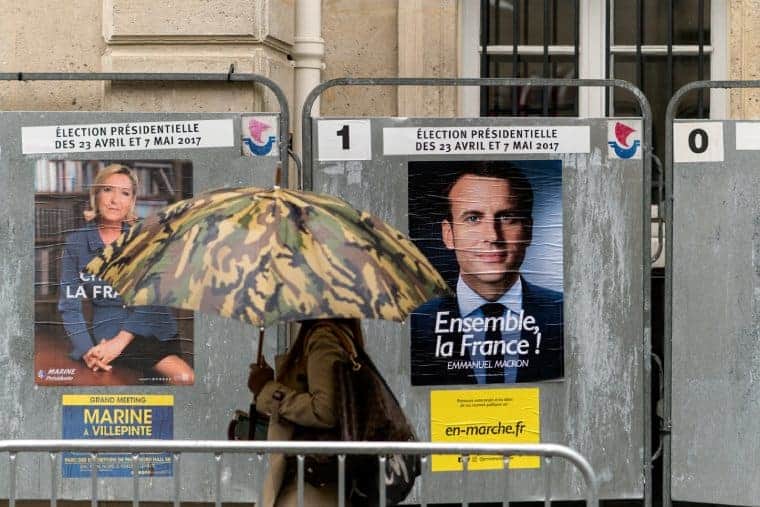 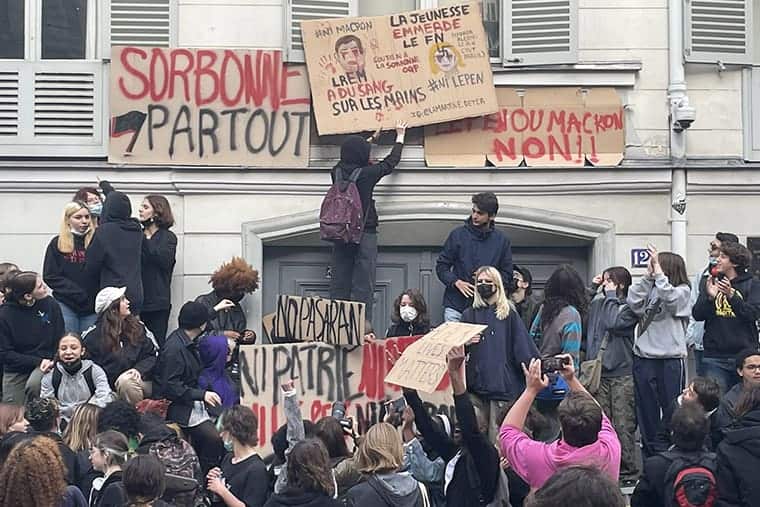