This article is over 15 years, 4 months old
One protester from the Samidoun network of activists managed to get into Blair’s press conference in Beirut and disrupt it in front of the world’s media.
Downloading PDF. Please wait...
Saturday 16 September 2006

One protester from the Samidoun network of activists managed to get into Blair’s press conference in Beirut and disrupt it in front of the world’s media.

She unveiled a banner and called out, “This is an insult to the families of thousands of Lebanese who have died – shame on you, Mr Blair”, before being bundled away by security.

Photojournalist Guy Smallman, who has just returned from covering Lebanon for Socialist Worker, recalls his reaction on seeing the footage of the protest.

“It’s not often that I laugh out loud at the news,” he said. “Today, however, the sight of Caiomhe Butterly disrupting Blair’s Beirut press conference certainly did it for me.

“I’ve know Caiomhe for some time and worked alongside her when I first arrived in Beirut at the beginning of August. She is one of the most skilled and dedicated peace activists in the Middle East.

“In 2002 she was shot through the leg by an Israeli sniper while acting as a human shield in occupied Palestine. In 2003 she travelled to Baghdad to report on the reality of occupation.

“When I saw her last in Lebanon she was helping to set up a grassroots relief project in the devastated border village of Aita al-Shabb.

“Speaking near perfect Arabic with an in-depth knowledge of the region and its problems, she always combines her political work with a warmth and compassion that is rare these days.

“As for Blair? He brushed off the disruption with his usual po-faced arrogance, saying that he is well used to demonstrations. He should be – he has now been the second most hated man on the planet for over three years.” 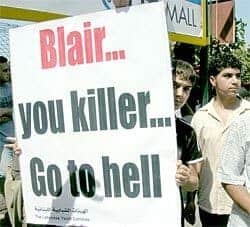