This article is over 17 years, 3 months old
The Latin American country of Bolivia is witnessing another bout of struggles between the government and the movements which oppose its policies. President Carlos Mesa resigned last week because of the huge scale of the mobilisations against him. But the next day he was back in office.
By Lucia Schnell
Downloading PDF. Please wait...
Saturday 19 March 2005

The Latin American country of Bolivia is witnessing another bout of struggles between the government and the movements which oppose its policies. President Carlos Mesa resigned last week because of the huge scale of the mobilisations against him. But the next day he was back in office.

Trade unions began a 48 hour strike against the government on Tuesday of this week.

Bolivia has seen a series of protests against the multinational companies who control gas and water supplies in the poorest country in Latin America. These resources are the second biggest in the continent and will deliver huge profits, while large parts the population live in poverty.

In the last five years people have intensified their struggle. A revolt against the oil multinationals in 2003 developed into a fight against poverty and exclusion. This uprising overthrew the government and brought Mesa to power. But Mesa has continued the politics of his predecessor Sanchez de Lo Peasants and workers have blocked roads across Bolivia in the last few weeks demanding the renationalisation of Bolivia’s natural gas company. They joined the strike action of the inhabitants of the town of El Alto, who are fighting for the expulsion of the water multinational Suez.

During Mesa’s 17 months in office he has seen over 820 protests. Mesa has gathered some support from the middle classes, who want an end to the protests, but the demonstrations for him were small.

Mesa’s resignation was a ploy to win the united support of the traditional ruling class parties, and to blackmail the main opposition party Movimiento al Socialismo (MAS) to demobilise the protests. The three neoliberal parties in parliament reinstated him the next day. Businessmen, the International Monetary Fund (IMF) and the US government were relieved.

Mesa has tried to get a “national pact” in favour of foreign investors, which MAS has opposed. Although MAS does not want to overthrow Mesa, it wants to continue the battle against the multinationals.

The “national pact” was immediately countered by an “anti-neoliberal pact” from the movement, signed by MAS leader Evo Morales, other indigenous and peasant leaders, trade union activists and the leaders of El Alto.

The coalition is planning further protests to fight for the control of natural resources.

Until now the protests against Mesa’s IMF-designed policies had been small and dispersed, because MAS had backed his measures.

Many who placed their hope in Mesa are now looking to their own strength. This can open up possibilities for new victories for the movement and a political radicalisation in a continent which is seeing a wave of struggles.

Protesters take on the right in Cochabamba, Bolivia 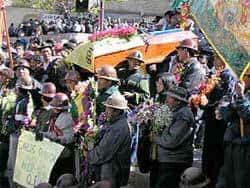 Revolt in Bolivia has come from the grassroots