This article is over 12 years, 9 months old
Claire Ceruti, the editor of Socialism from Below magazine in South Africa, spoke to Ken Olende about the significance of the general election this week
Downloading PDF. Please wait...
Tuesday 21 April 2009

Why is this election causing so much excitement in South Africa?

The wave of anger at the ANC government’s neoliberal policies has combined with a belief that the ANC can be changed.

A revolt inside the ANC against his arrogance meshed with growing discontent on the streets about living conditions, low wages and low quality jobs that survived apartheid because of the government’s business-friendly policies.

How did the revolt against neoliberalism grow?

Between 2004 and 2008 there were an average of two cases of “unrest” every day. Many were motivated by complaints about the lack of real democracy and broken promises.

Strike days reached an all-time high in 2007 after Mbeki and business leaders declared an economic turnaround.

The Cosatu trade union federation and the South African Communist Party (SACP) have been in a tripartite alliance supporting the ANC government since the end of apartheid in 1994. Disagreements were discussed behind closed doors.

But president Mbeki increasingly turned a deaf ear to the alliance.

But in 2005 the tensions burst into the open – especially over the massive job losses that accompanied liberalisation.

Cosatu called a number of one-day actions against job loses. One in Johannesburg had an enormous turnout.

Here Cosatu general secretary Zweli Vavi openly criticised the government. He pointed out that the gap between rich and poor was growing, and said a class war was developing.

This happened a couple of days after Mbeki had suspended deputy president Jacob Zuma from the cabinet.

Vavi spoke in defence of Zuma and many activists came to see Zuma as someone who was being victimised like them.

At about the same time the poorest townships started exploding into struggle. Local elections were coming and the ANC tried to mobilise its vote.

But in the townships people said that they had been promised life would improve – but they were still living in shacks and using bucket toilets.

Protests focused on ANC councillors and many in the leadership realised Mbeki was becoming a liability.

The new leadership of the ANC claims the mantle of the last four years of revolt against the status quo – not only the internal rebellion but also the protests and strikes.

What is Jacob Zuma’s political background?

Zuma was deputy president. He wasn’t a radical. As Mbeki’s neoliberal plans were imposed he kept quiet. But Zuma was a negotiator. While Mbeki was autocratic and distant, Zuma kept talking to alliance partners.

In 2005 he was accused of taking a kickback in an arms deal.

The irony of the whole thing is that whether he took it or not, the rest of the cabinet were complicit in the idea of the deal – in spending money on weapons not people’s needs.

He was removed from his job and people like Vavi interpreted this as an attack on the unions.

Cosatu and the SACP began to back Zuma as someone who could help them regain their influence in the ANC.

Zuma rode up on the huge wave of struggle against neoliberalism. This was what gave him a radical sheen. A lot of people who look to him even now see him as embodying that experience of being on strike for the first time or actually standing up to Mbeki.

He succeeded in becoming president of the ANC in 2007, and is now all but certain to become president of South Africa.

What is Zuma offering people?

The ANC’s election manifesto now promises to extend government child support grants to all poor children until 18, which Mbeki’s government refused to do just months before his resignation.

It also promises a state-led industrial programme using public and private investment to create jobs. It says it will implement new laws to protect subcontracted workers, who were the backbone of three long strikes in 2006.

However, it doesn’t make a clean break with the Mbeki years. A quarter of the manifesto is devoted to a section celebrating the achievements of the government over the past 15 years.

Continuity with the past is also reflected in the means by which the manifesto aims to deliver its promises – there are no plans to increase taxes on the rich or attack profits.

State coffers are already strained. With real unemployment above 30 percent, many poor South Africans already depend on pensions and child support grants, and the number is likely to rise in the coming months of job losses.

Why has the ANC split?

Mbeki’s resignation signalled a point of no return for some in the ANC.

At the end of last year, a section broke to the right to form the Congress of the People (Cope), although Mbeki himself has not joined it.

On the surface it is not a simple split between right and left. There are business leaders and trade unionists on both sides.

Both parties still claim the mantle of the liberation struggle. Both are led by anti-apartheid stalwarts.

However, the new party is the business-as-usual party. Cope stresses constitutionalism and the rule of law, largely because the ANC has tried to deflect corruption charges against Zuma.

Undoubtedly the ANC will win the election.

It’s only a matter of what the margin will be.

Is most of the left lining up behind Zuma?

Most people feel that we can push on with the new version of the ANC. A lot of people see this as a return to the party’s original principles that Mbeki led them away from.

This election has had the highest voter registration since the one that marked the end of apartheid – particularly among young people and women.

However, there is an important minority that has called for a boycott. This is mostly composed of shack dwellers who say nothing has been delivered and they’re not voting until something is.

The organised parts of this are people around the Anti-Privatisation Forum.

Their argument is that instead of voting we should organise to fight.

But I worry that this could distance us from people around the ANC who have a radical interpretation of what Zuma might do, whether we believe he will deliver or not.

After the election the leadership of the ANC will face a huge contradiction as the financial crisis begins to bite.

One trade union federation estimated that 24,000 jobs were lost in the last six months of 2008. More cuts are threatened this year.

South Africa remains a deeply unequal country, both in race and class terms.

Timeline of the Libyan uprising: from Tunisia to Tripoli 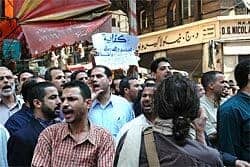