Celebrations on the streets of Uruguay

OVER 500,000 workers and students, young and old, filled the streets of the cities of Uruguay to celebrate the election victory of Frente Amplio (Broad Front) last weekend.

Broad Front is a left coalition made up of socialists, Communists and nationalists.

The celebrations began minutes after the television news networks confirmed that presidential candidate Tabare Vazquez had received more than 50 percent of the votes and the Broad Front parties had achieved a majority in parliament.

But this wasn’t the only reason for people to celebrate.

A referendum was held at the same time as the elections.

Voters had to decide if the water resources and services remained state owned or went to the transnational corporations under a privatisation plan.

The result wasn’t a surprise.

While the left celebrates, the right are reeling.

The two right wing parties that have governed Uruguay during the past 180 years were smashed in the elections, and their future isn’t clear.

But the result of the referendum against the water privatisation—and the hundreds of thousands who took to the streets—seem to demonstrate that great sectors of the population want more than painkillers against neo-liberalism.

The Broad Front will have to show how far is willing to go. 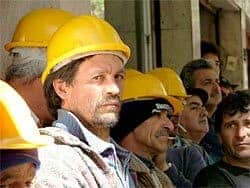