This article is over 9 years, 5 months old
Journalists at Southern Weekly newspaper in Guangzhou, China, walked out on strike on Monday of this week over press censorship.
By Sarah Ensor
Downloading PDF. Please wait...
Saturday 12 January 2013

Journalists at Southern Weekly newspaper in Guangzhou, China, walked out on strike on Monday of this week over press censorship.

The new piece praised the government. It was headlined, “We are now closer to our dream than ever before”.

Solidarity protests by hundreds of people were continuing outside Southern Weekly’s offices as Socialist Worker went to press.

The striking journalists are demanding that the censor is sacked. Students have joined the protests. So far the police have barely interfered.

The editorial was written shortly after the top leaders of the Chinese Communist Party (CCP) changed over.

Last year at the CCP’s 18th Congress the outgoing president Hu Jintao tried to distance the government from corruption. He said that it could “kill the party and ruin the country”.

His successor, incoming president Xi Jinping, then promised he would punish corruption with an “iron fist”. Corruption at all official levels is widespread. 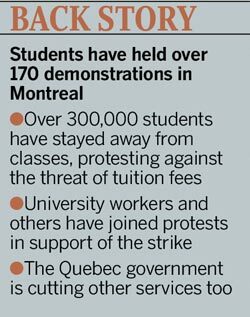 Quebec: students’ strike wave has government on the ropes