This article is over 9 years, 9 months old
Hugo Chavez has been re-elected as president of Venezuela with just under 55 percent of the total vote—the lowest since he first took the presidency in 1998.
By Mike Gonzalez
Downloading PDF. Please wait...
Monday 08 October 2012

Hugo Chavez has been re-elected as president of Venezuela with just under 55 percent of the total vote—the lowest since he first took the presidency in 1998.

Over 80 percent of the population voted. Henrique Capriles, the opposition candidate, captured just under 45 percent thanks in part to the huge resources poured into his campaign (matching those behind Chavez).

Most of the world’s press saw the clean cut, white candidate as a safe social democrat who promised to continue Chavez’s social programmes in health, housing, and education.

But behind Capriles were the same forces that had maintained a vitriolic anti-Chavez campaign throughout his years in office.

These were the people who kidnapped Chavez in a failed coup in 2002. They tried to destroy the Venezuelan economy in the “bosses’ strike” of 2002-3.

Their policies would have delivered Venezuela into the same neoliberal hands that launched a decade of attacks on the living standards of the country’s majority through the 1990s.

For the Venezuelan masses, Hugo Chavez was identified with the resistance to those neoliberal strategies that began with the popular rising of 1989, the Caracazo.

That is why he still enjoys their support, despite the growing discontent with the course that the Bolivarian revolution has taken.

In 2002 and 2003 it was the mass mobilisation of the poor and the working class that defended Chavez and broke the bosses’ strike.

But these services are deteriorating, largely because of deep and widespread corruption in the Venezuelan state.

That reflects the rise of a new ruling group which, despite the red T-shirts and the revolutionary rhetoric, has enriched itself and created an apparatus of power accountable to no one.

Already the bureaucrats are manoeuvring for the moment when an ailing Chavez leaves power. They will serve their own interests.

The immediate question for the left and for activists, Chavez supporters or not, is the need to rebuild organisations on the ground that will be able to act independently of their rulers, whoever they are.

Such organisation would enable the Venezuelan masses to defend their own class interests—and to deepen a revolution that still has far to go.

Unease over Syrian National Initiative's links to the West 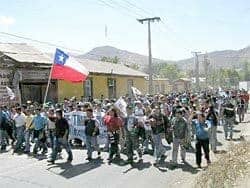