Those targeted include people fighting against displacement from floods, and privatisations, mass sackings and non-payment of wages.

The state has cracked down on those affected by the flood in Hunza—about 900 miles from Karachi.

Landslides caused a blockage of the Hunza river in January. An artificial lake submerged an area ten miles long and displaced around 14,000 people.

But the government has not cleared the lake or compensated the displaced.

Tensions have increased since police killed two people who blocked a road during a protest last month in Hunza.

Paramilitary police now have the whole area under siege so they can arrest innocent civilians.

Many of those detained are well known left activists, including members of the Gilgit-Baltistan Labor Party and the International Socialists, Socialist Worker’s sister organisation.

Babajan, an activist in the Labor Party/Progressive Youth, has been tortured over several days. His finger and toe nails were removed and he was beaten severely.

Some have been particularly targeted for their leading political role among young people. They have been tortured as punishment for their part in the struggle.

Elsewhere in Pakistan, thousands of workers from the giant KESC electricity firm are engaged in a bitter and protracted struggle to save their livelihoods.

Dozens of KESC union activists remain in custody after being arrested under draconian “anti-terror” laws in late August.

Over 40 trade union leaders and activists are in jail and face trial on terrorism charges. 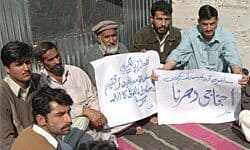 Anti-war protests in India and Pakistan against Bush’s visit