Two large protests took place side by side in central Seoul, capital of South Korea, yesterday, Wednesday. They were the result of political confrontation between the movement which is demanding the immediate resignation of President Park Geun-hye, and the supporters of the President.

The parliament voted to impeach the president last December, and she is now waiting for the final ruling from the Constitutional Court which is expected to take place on 10 or 13 March.

This ruling will decide whether the impeachment is carried out.

Park has been calling for her supporters to take to the streets since January. Her right wing forces designated 1 March, a national holiday, as their day for mobilisation and prepared for it during the whole of February.

They had claimed that “several millions” would come to their protest.

It was nothing near that.

However, mobilising between 100,000 and 200,000 people, despite the president’s very low approval rate, was enough to have a certain political impact on wider society.

The movement demanding Park’s removal organised a counter-protest, but the call came only in the middle of last week.

Despite such short notice, many people responded and filled the square. But the counter-protest did not outnumber the right’s protest.

Now the conservative press portraits the situation as if both sides of the public opinion regarding Park’s impeachment have similar weight.

This is complete nonsense.

If the movement against Park had put the same stress on mobilising for 1 March as the right wing forces did, it could have outnumbered them by far.

One need look no further than last Saturday’s protest, just four days ago, when one million people rallied to demand the immediate resignation and arrest of the president.

However, Wednesday’s confrontation does reveal the political weakness of the movement.

The radical left has been arguing for weeks that the movement shouldn’t let right-wing forces mobilise without facing confrontation.

The movement will use all its strength, including a general strike by the KCTU union federation, should the Constitutional Court dismiss the impeachment.

But the moderate forces within the movement did everything to avoid calling a counter-protest until last week when it was evident that the right wing’s mobilisation was gaining momentum.

There was also naive optimism within the movement that the right wing could not mobilise seriously. This too was a mistake.

The current political polarisation has deep roots, and confrontation cannot be evaded without providing a foothold for Park and her forces.

So it was a significant development when speakers from the main platform of the counter-protest officially declared that the movement will use all its strength, including a general strike by the KCTU union federation, should the Constitutional Court dismiss the impeachment.

Right wing forces are now saying they will continue to mobilise, whatever the court rules.

Park’s supporters are not limiting their fight to winning a court ruling or election, but are mobilising in an effort to shift the balance of forces in their favour.

The radical lefts are arguing that the movement should also build extra-parliamentary forces—including strikes.

Major protests are scheduled for every Saturday until the court ruling, and on the day of the ruling.

A South Korean socialist who has taken part in the recent mass protests against Park will join by Skype a meeting in London on Russia 1917: a festival of the oppressed andworkers’ revolution, Wednesday 8 March, 7pm, Student Central, Malet Street, WC1E 7HY. For details go to https://www.facebook.com/events/1019538211523436/?
Topics South Korea 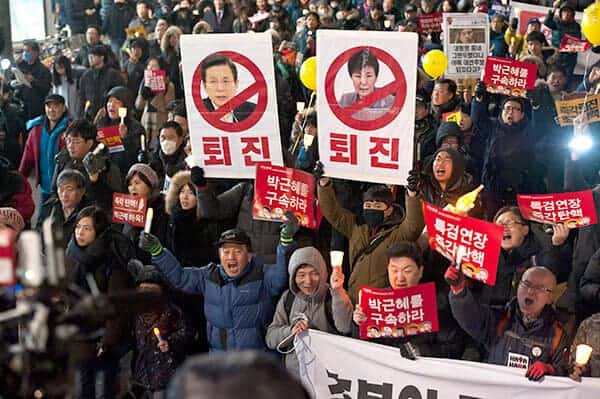 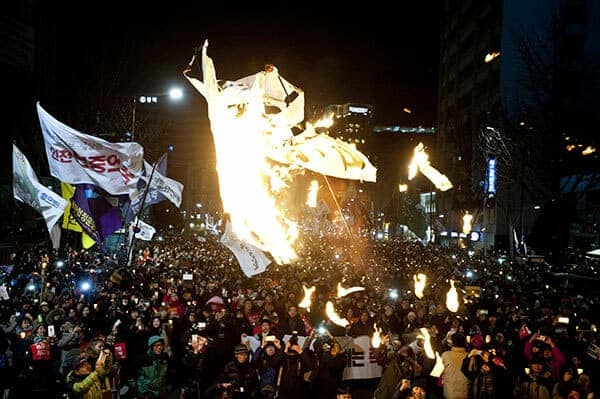