This article is over 10 years, 1 months old
Violence has erupted across the Democratic Republic of Congo (DRC) as it was announced last week that sitting president Joseph Kabila had won presidential elections.
By Ken Olende
Downloading PDF. Please wait...
Tuesday 13 December 2011

Violence has erupted across the Democratic Republic of Congo (DRC) as it was announced last week that sitting president Joseph Kabila had won presidential elections.

The country’s election commission announced that Kabila had won 49 percent of the 18 million votes cast, with opposition leader Etienne Tshisekedi on 32 percent.

However it was Kabila who appointed the commission and opposition supporters have no faith in its independence.

At least 18 people have been killed in the protests so far.

DRC is a mineral-rich central African country two thirds the size of Western Europe. It has a population of around 50 million.

It was torn apart by six invading African armies and dozens of local militias after dictator Mobutu Sese Seko was overthrown in 1997. More than four million people died.

Kabila’s father Laurent led the forces that overthrew Mobutu. He was president until his assassination in 2001, when Joseph took over.

Opponents accuse Joseph Kabila of being in the pocket of imperialism. He has certainly attempted to develop alliances with Western powers.

Kabila’s forces have been implicated in war crimes, including the use of mass rape.

But his main rival Étienne Tshisekedi makes an unconvincing anti-imperialist.

He participated in the process that led to the execution of Congo’s first president, Patrice Lumumba.

Tshisekedi served in several of Mobutu’s governments, ending up as Mobutu’s prime minister in the early 1990s.

Nevertheless, people are right to come onto the streets in anger and protest at the distortion of democracy.

And Congolese people living in Europe have demonstrated their anger too. Several hundred protested in central London last Saturday afternoon.

Some complained of heavy handed policing as they tried to disperse at around 4.15pm. Police surrounded protesters and marched them towards Charing Cross train station.

Some sat in the road. A group broke through the police line into Trafalgar Square. In the following hours 143 were arrested.

Nine have been charged with minor offences. But more than 100 have been bailed to return over various charges. 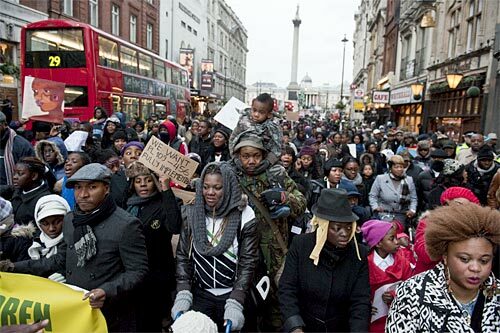