Desperation in Detroit: ‘There’s so much tension, something’s going to explode’ 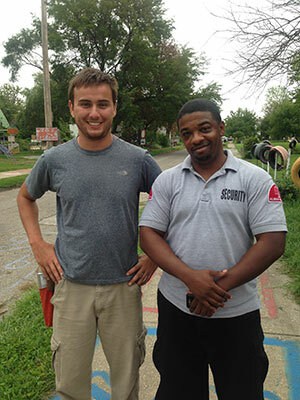 “People in Detroit are really suffering. They are not living, they are in survival mode.”

Those are the words of Raymon Dorsett, who works in the Michigan city securing and fixing street lighting.

He and workmate Andrew Stead spoke to Socialist Worker about the the crisis  that is sweeping the city— and the people most affected by it.

Detroit, once the US’s booming Motor City, is in the bankruptcy court. It is the biggest city in US history to face bankruptcy.

A plan currently being negotiated would see tens of thousands of ordinary people pay a heavy price to appease Detroit’s creditors.

It would mean wholesale privatisation of public services. And retired public sector workers face big cuts to their pensions.

Andrew said he is lucky to have a job that is improving life in the city, as conditions for some of the poorest people are “unreal”.

But he said that even for him “wages don’t match the cost of living”.

“You have to work every single day,” he said. “You can’t afford to be sick or be hurt.”

Built for cars, it spans over 139 square miles.

The shrunken population is spread out over this large area.

Whole blocks and streets are blighted by empty and burned out homes, churches, police stations, schools and shops.

In some neighbourhoods deserted homes have been bulldozed and the empty lots have become wild fields of grass and weeds.

The massive car factories extending along miles of highway still dominate, although swathes of machinery and buildings are rusting and derelict.

Wealthier, and most white, residents have long since escaped the city boundaries.

“People are angry, they’re frustrated. They have nothing.”

Pointing to the tower blocks downtown he added, “Corporate Detroit is doing well while neighbourhoods and the people in them are dying.”

Water rates in Detroit are 50 percent higher than the national average and have risen by 119 percent in the last ten years.

Local residents took to the streets to protest. Valerie Blakely was one. She had stopped water company officials cutting off her water.

“I told them they weren’t shutting mine off today, and put my foot over the access point,” she said.

But most of Valerie’s neighbours were cut off.

“They were all out in the street, not knowing what to do, not knowing how they were going to cook,” she said.

Demonstrations, and the intervention of the United Nations, won a suspension of the water policy. But it ran out last week—and the cut offs have resumed.

Noisy town hall meetings have seen local people protest at attacks that include what the authorities call “rightsizing” of the city.

This means some areas would receive emergency services and amenities and others would be declared unsustainable—with people left to fend for themselves.

“Something has to change, said Raymon. “There’s so much tension building among folks here—something’s going to explode.

“It’s like a pot of water and it’s really boiling.”