Around 180,000 municipal (council) workers are also on indefinite strike.

Strikers clashed with police in two places on Monday. In Pinetown outside Durban, about ten Samwu union members were shot and wounded after police fired rubber bullets. Some 49 strikers were arrested.

In Benoni on Gauteng’s East Rand, police fired stun grenades and rubber bullets at striking workers. The union is demanding a 9 percent wage increase while the employers are offering 6 percent.

The union began an indefinite strike after a three day strike last week failed to secure them a better offer.

Samwu spokesperson Roger Ronnie said the union was launching sit-ins and protests, and would continue with marches in Johannesburg, Cape Town and the Chris Hani Municipality in the Eastern Cape.

“From Musina in the north to George in the south of the country, members are holding meetings, picketing or staying away from work,” he said.

“We are told that inflation is low. But this is not the reality confronting workers every day when they must shop for food, buy clothes for their families, pay medical expenses, and pay for water and electricity.”

With a rising level of discontent, it remains to be seen if the mood will find a new political focus of opposition to the ANC government from the left. 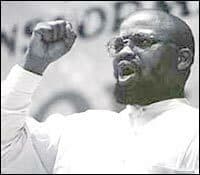