This article is over 16 years, 8 months old
A popular uprising in Ecuador has deposed president Lucio Gutierrez. Socialist Worker spoke to Julia Villacres, an activist from Ecuador now living in east London, about the political situation there.
Downloading PDF. Please wait...
Saturday 14 May 2005

On 8 December, Gutierrez annulled the supreme court in Ecuador. He didn’t give any reason, or quote any law—he just abolished it because it was too independent. From that date the people started to organise themselves, holding assemblies and taking to the streets in massive numbers.

Finally Gutierrez was forced to seek asylum in the Brazilian embassy on 20 April. The people have gained a great victory — but capitalism does not want to accept this situation.

Both international powers and the local rich don’t want to invest in Ecuador until they are able to impose the Free Trade of the Americas Agreement. So now we’re in a stand off situation between the two sides.

Ecuador is a rich country — it has great natural resources such as oil as well as very productive agriculture. But its people are desperately poor because of corrupt governments.

We also have huge foreign debts. But the Gutierrez government was such a sell out that it paid its interest in advance in order to gain better credit.

Two years ago the people voted for Gutierrez. He arrived in power with promises of change. We were hoping to see those changes — but very quickly he started to do the same as all the previous governments.

It’s the popular struggle that has given us hope. People have been strengthened by their victory. Every time we mobilise the people we’ve come out of it triumphantly — and this makes it easier to organise ourselves. People now have a great deal of self confidence and we’re not scared by the military.

The uprising was initiated by the indigenous people’s movement in the countryside, but it soon spread.

In Quito, the capital, there are hardly any indigenous people. But their example gave people there the inspiration to take to the streets and get rid

of the president. It’s much easier to create an uprising if you’re united.

The poverty in Europe can’t really be compared with Latin America in terms of suffering and hardship. Nevertheless working people in Europe are being impoverished and they’re going to become poorer if economic policies keep going in the same direction.

Our interests are the same — in Latin America we struggle for human rights and the basics of life, while over here we’re trying to maintain decent pensions and a decent standard of living.

It’s wonderful to be involved in struggle. If you’re not doing things politically, if you’re not convincing people, you just get depressed. 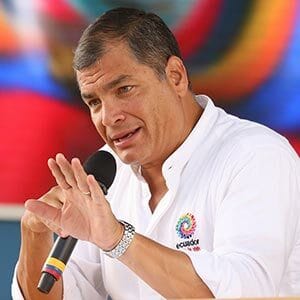