This article is over 7 years, 7 months old
Opponents of Egypt’s regime face repression but are determined to keep resisting, says?Judith Orr
By Judith Orr
Downloading PDF. Please wait...
Tuesday 27 May 2014

An election for Egypt’s next president was taking place as Socialist Worker went to press.

Results are to be announced on Thursday of next week.

El Sisi is committed to the counter revolution’s offensive. This has seen Muslim Brotherhood supporters shot, detained and sentenced to death for protesting, and socialists imprisoned.

They said, “the people behind walls do not seem to matter to the regime”.

They want to highlight the cases of Abdallah El Shamy, a journalist who covered Brotherhood protests for Al Jazeera, and Mohamed Sultan.

Mohamed arrived from the US to look after his sick mother—his father is a Brotherhood member.

Aida told Socialist Worker, “What is at stake are the lives of two young men held in political detention, despite the minister of justice’s claim that Egypt has no detainees.”

Both men have been on hunger strike for over 120 days and may be close to death. Abdallah says he has been force-fed.

Abdallah’s wife, Gehad Khaled, has been on hunger strike for 40 days for his release. She said, “No independent human rights body has been allowed to meet him, not even once”.

Aida said, “Thousands are being held in prison. We strike in an attempt to shed light on the injustice being done, on a regime that abolished political debate and replaced it with prisons and torture chambers.”

Lawyer and Revolutionary Socialist Mahienour el-Massry was sentenced to two years and fined over £4,000 on Tuesday of last week.

She is now in the women’s prison in Damanhour city after having gone missing in the system when she was first sentenced.

Revolutionary Socialist Tahar Mukhtar was in the court.

He told Socialist Worker that police “dragged her away quickly. She didn’t have a chance to speak.”

Mahienour was charged with various offences after protesting last December outside the Alexandria trial of police officers who murdered political blogger Khaled Said.

She will appeal on the 28 June. But she faces a separate and even more serious case on 21 June, alongside other activists.

She is charged with storming a police station when she went to represent arrested protesters.

She could face a further sentence of more than five years if found guilty.

Mahienour was defiant when first threatened with imprisonment.

She said, “The state keeps imagining that with its laws, prisons, and dogs it can protect itself. But even if you gather all of us in prison, the revolution will continue.”

Mahienour and the other detainees need urgent international solidarity.

Go to egyptsolidarityinitiative.org for details of actions to support activists in Egypt
Topics Egypt 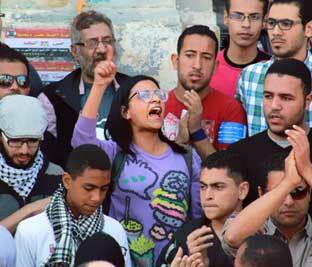