It was the biggest mobilisation on campuses in decades.

The day marked exactly one year since mass protests and strikes forced dictator Hosni Mubarak to step down.

Strikers called on Egypt’s military rulers to hand over power to civilians.

They also demanded that army generals are held to account for the crimes they committed over the past year.

Secondary school students shut down hundreds of schools and organised marches on the day too.

This is something Egypt has not witnessed since the 1919 revolution against British occupation.

The student strikes came on the heels of the Port Said football stadium massacre, where more than 70 Al-Ahly fans were brutally killed.

Scaf, the ruling military council, and the security services have been blamed for the massacre.

They want to punish organised football fans known as the Ultras because of their involvement in the revolution.

The massacre shocked wide sections of the population.

And it further alienated members of the Egyptian middle class and sections of the elite from the ruling junta.

Crackdowns on Revolutionary Socialist (RS) activists in Alexandria, the Nile Delta towns of Mansoura and Mahalla and the southern province of Bani Sueif followed the massacre.

Plainclothes thugs and uniformed security forces assaulted activists, tore down banners calling for the 11 February strike and burnt down the group’s red flags.

They rounded up other activists who were spraying graffiti in support of the strike on walls of factories.

The state-run media and the official newspaper of the Muslim Brotherhood, which opposed the strike, have also been directing a smear campaign against the RS.

They have accused the RS of inciting violence, destroying the economy with strikes and, even more ludicrously, being agents of the CIA.

Egyptian parliamentarians joined the denunciations of the strike. Islamists in the Muslim Brotherhood and the Salafi movement hold most of the seats.

Both had largely refrained from mobilising against Scaf over the past year, hoping to share power.

They have promised the generals a “safe exit”.

Since its inauguration on 23 January, parliament has become a target for protests by workers and activists demanding that the goals of the revolution are achieved.

Most of the MPs sided with the interior ministry’s crackdown on protesters.

Socialists, on the other hand, have continued to mobilise.

Along with other political forces, they helped to organise mass marches last Friday that besieged the Ministry of Defence from different locations in Cairo.

Smaller protests took place in public squares in the provinces at the same time.

The Islamists boycotted the protests.

The strike was largely successful in the universities and schools but the response from workers was weak.

This was largely expected. No single political force, including the RS, has enough roots in the workplaces.

The state-run unions, on the other hand, waged a war against the strike.

Government newspapers ran “reports” of how workers decided to “increase production and work for free” in response to the strike calls.

The campuses are fortunate.

Since the revolution, they have relatively more independent student unions and political student societies that can mobilise for a successful general strike.

The biggest challenge remains creating the same entities in workplaces that can mobilise workers and coordinate strikes.

See videos of Egypt’s protests one year after the fall of Mubarak: www.youtube.com/watch?v=h0dmUEUDGoY 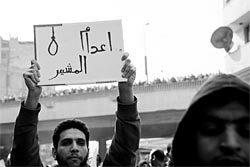