US journalist James Buck witnessed the crackdown in Mahalla following the uprising.

He was arrested, along with other reporters, while covering a demonstration demanding the release of prisoners. He has since been released.

“The police were in control with troops lining every major street and armoured vans with snipers on top patrolling the streets,” he said.

“Many shops were closed but there were people out and about, although they are subdued. There were people protesting the prices of food, but the main focus was people demanding ‘Where is my son?’

“I met many people who were scared for their children.

“They said they were taken by the police. They didn’t know anything about them. The police were denying they had them. They had disappeared.

“Around nightfall a crowd gathered near the police station where apparently police had said they could bring food to those in jail.

“Mothers were wailing and crying in the streets. By night a large crowd was outside the prison awaiting the release of prisoners. By 10pm only three had been released, all young boys around the age of ten.

“When I asked people about the ministers’ decision to grant textile workers a bonus they seemed not to care.

For updates on the situation in Egypt go to » www.arabawy.org 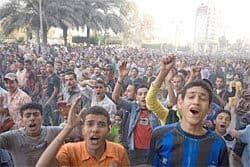