An earthquake and tsunami hit the Fukushima power plant last year. It caused meltdowns in several reactors, releasing radiation into the atmosphere. The Ohi reactor is the first to reopen since the disaster.

The protest was one of the biggest since demonstrations against the US-Japan Security Treaty in the 1960s. Yet the police estimated numbers at just 17,000. Lots of media ignored it. National broadcaster NHK didn’t report it at all.

Protesters gathered in front of parliamentary buildings on Friday of last week chanting, “No more Fukushima” and “Do not kill children!” People see the decision to restart the plant as anti-democratic, a move to protect ruling class interests. Their anger is justified.

The government is restarting the Ohi reactor despite the fact that the final report from the national accident investigation unit into the Fukushima disaster is not complete.

Many people are doubtful about the safety of nuclear plants. The government failed to take safety measures, encouraged by the International Atomic Energy Agency, in the past. And many nuclear plants in Japan are constructed in vulnerable locations at risk of earthquakes.

Political corruption in Japan has allowed care for the environment to be disregarded. The authorities are not accountable. The mainstream media has long ignored ordinary people, and when it does feature them it is in a hostile tone.

The Tokyo power company committed the worst criminal act in history at Fukushima. The explosion spread radioactive materials all over the world. Yet the police and inspectors have not yet carried out their own investigation. And there have been no criminals arrested.

The government demanded that local authorities accept a lot of radioactive debris. It also said people should eat food produced in the Fukushima area to share the “public pain” as Japanese citizens. Many foods are considerably contaminated and have not been properly analysed for safety.

Social activist and writer Shiro Yabu wrote that “the kind of society in which people must eat contaminated foods with enforcement from the government should be abolished!”

There have been many protests against the government’s economic and social policies. But last week’s demonstration was different.

Many protesters weren’t members of trade unions. They were just men and women, parents and grandparents of children who face health problems as a result of exposure to radioactive substances.

Many people who didn’t think of themselves as “political” before reached the conclusion that the ruling class will not help anyone without protest.

Women and children are forced to stay in the contaminated area around Fukushima. The government hasn’t taken any measures at all to evacuate them.

The demonstration comes from a grassroots movement, one characterised by a new “class” politics based on social justice and solidarity.

As protesters gathered, prime minister Noda said in parliament, “Yes I can hear big voices outside.” But he stressed that his decision to restart the nuclear plant would not change.

Noda introduced a new consumption tax on ordinary people, but allows tax avoidance schemes for the rich. The government is forcing protesters from the Ohi plant using riot police. 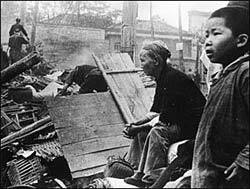 What lies behind the anti-Japanese protests in China?

Fukushima nuclear crisis creates a spirit of dissent in Japan