Filipinos fight to survive in aftermath of typhoon Haiyan

People in the Philippines are still struggling to survive a week after typhoon Haiyan hit. Some 4,000 people are now confirmed dead, but relief services fear that many more have yet to be counted.

Adrian Williams from community organisation Philippine Generations lives in London. He said, “In a lot of places the first thing to sort out is burying the dead. There are still some areas with no communication at all.

“But in the worst-hit areas anyone who can, leaves.

“Some just can’t get transport, but others are staying to search for their families. People won’t leave if they don’t know if their wife or mother is alive.

“A lot of people on Leyte island where Tacloban is, have gone south to Baybay. It’s still functioning as a city.

“No one expected the storm to be this bad. Local officials who you would expect to organise things were hit too. Many are queuing with other people or have gone out of the area.

“I’m disappointed in a lot of the media coverage in Britain. From some of it you’d think brown people are just sitting about crying while white people discuss what to do to solve the problem.

“People in the Philippines and Filipinos elsewhere have not just been sitting back waiting for help.

“We have a notion of bayanihan. Traditionally if someone in a village had to move, everyone would come together to pick up their whole house and carry it.

“The community all works together in a crisis.”

The US navy has received a lot of praise for its role in bringing aid, with the aircraft carrier George Washington. But the US navy is not sailing the Pacific out of altruism.

Before the Second World War the US occupied the Philippines effectively as a colonial power.

It maintained military bases until the early 1990s—and Barack Obama signed an agreement last year to return US forces to two of them.

Adrian said, “I think the aid—fuel, water or food—is very important in the short term. But after that we need something different.”

Many governments try to compete for generosity when it comes to promising aid after a disaster, but they are often less keen to pay up once the disaster is out of the news. 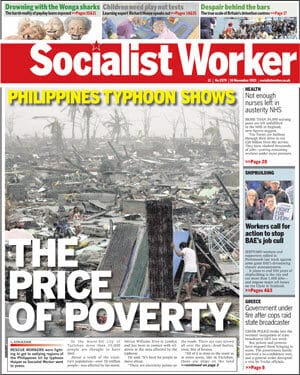 Poverty is the killer in ‘natural’ disaster