This article is over 18 years, 7 months old
THE STAKES are mounting in the battle over workers' pension rights in France. Sunday saw a new round of massive demonstrations against the Tory government's plan to force workers to work more years, and pay more, for poorer pensions. Around 600,000 people marched in Paris, with tens of thousands more marching in cities across the country.
By Paul McGarr
Downloading PDF. Please wait...
Saturday 31 May 2003

THE STAKES are mounting in the battle over workers’ pension rights in France. Sunday saw a new round of massive demonstrations against the Tory government’s plan to force workers to work more years, and pay more, for poorer pensions. Around 600,000 people marched in Paris, with tens of thousands more marching in cities across the country.

Major strikes also continued on Monday and Tuesday, as the government prepared to present its plan to a cabinet meeting on Wednesday. Key Tories have made clear that the whole future of their assault on workers and welfare now hangs in the balance.

‘We must not retreat from these plans,’ declared Alain Juppe, president of the governing UMP coalition. ‘The time for decision has come.’ Juppe was the Tory prime minister who headed the 1995 major assault on welfare, and whose government was effectively broken by mass public sector strikes and demonstrations.

The spectre of that defeat has haunted France’s rulers ever since. Now they are both determined to carry through their new attack, and fearful of the consequences if they are beaten. Francois Bayrou, another key Tory leader, warned on French TV on Sunday, ‘What is at stake is not just the question of pensions but the whole issue of whether France is reformable or not.’

That ‘reform’ is familiar to us in Britain – cuts, privatisation, attacks on welfare. There is no doubting the potential of workers in France to win against these attacks.

Sunday’s march in Paris was vast, with three separate routes across the capital. Trains and buses had brought people from across France, many travelling through the night. In some areas workers occupied rail stations to force the national rail company to lay on special trains. Others who were unable to get to the capital joined local marches.

Many teachers joined the marches. They are fighting a parallel assault by the government. This attack, under the cover of ‘decentralisation’, opens the way for job cuts, privatisation and a two-tier education system.

Tens of thousands of teachers have been on ‘indefinite’ strike in parts of France for weeks-disrupting exams in some areas. Yves Gelin, a teacher, told journalists, ‘Behind the reform of pensions and the decentralisation plan in education lies the same neo-liberal logic.’ A parent, Manuella Rebaelo, who marched with striking teachers, said, ‘They are on strike at my children’s school. But it is not the strikers who are putting our children’s future at risk. It is the government.’

School student Remin Thomachot said, ‘It not easy to revise for exams in these conditions. But it’s a fight for our future and we have to organise and protest.’ Council workers, rail workers, postal workers, civil servants, telecom workers and other public sector workers marched, and many were on strike on Monday or Tuesday of this week.

Health workers and some civil servants were also out on Monday. On Tuesday it was the turn of telecom, post, airline and air traffic control workers-and another national strike of teachers. In some areas workers were going further.

In the important Bouches du Rhone region around the city of Marseille a joint regional body uniting all the key unions called for Tuesday to be a day of action with strikes across the board. Significantly that appeal was backed by the CFDT union federation in the region, despite the union’s national leaders attempting to agree a rotten deal with the government.

Private sector workers joined Sunday’s march too. Car workers from Toyota and Citroen marched together. Jerome, from Toyota, told journalists, ‘Our job is very physical. We should be able to retire at 55-otherwise we will go straight from the factory to the cemetery and have our retirement there.’

Omar from Toyota added that Sunday’s protest should be ‘a launching pad for a general strike until the government retreats’.

Debate in movement over way to win

THE CRUCIAL battle in the coming days will be within the movement. It is a fight between those who want to push for a general strike and those who want to hold the movement back. Leaders of the key CGT and FO union federations have been making threats about more sustained strikes, but also holding back workers.

They hope to do a balancing act, slowly ratcheting up pressure while limiting the action in the hope that the government will agree to serious talks. Fighting a determined government while not using the full power of workers risks a serious defeat.

There are many workers and union activists who understand this and want to take the kind of action which can guarantee victory. The role played by those in the main parties workers look to, will be crucial in determining which strategy wins out.

Leaders of the main opposition party, the Socialists, equivalent to Britain’s Labour Party, joined Sunday’s march. They are more interested in riding the movement to rebuild their electoral fortunes than in taking on a government plan whose outlines they half agree with.

And the Socialist Party leaders fear a general strike almost as much as the Tories do. The powerful Communist Party, influential in the CGT union federation, is a big force.

It too hopes to rebuild its base. It lost members and votes after its dismal record in a government alongside the Socialists that ended in electoral disaster last year.

The Communist Party paper L’Humanite on Monday declared the movement had Tory prime minister Jean-Pierre Raffarin with his ‘back against the wall’. But then it dismissed the idea that the country was about to ‘topple into a general strike’, and meekly warned that the indefinite strikes planned by some workers would mean difficult times for the government. France’s important revolutionary socialist parties are pushing for more determined action. They are the LCR and LO, which between them won 2.8 million votes in last year’s presidential elections.

In the coming days they will need to hurl themselves into that fight. The only way to guarantee victory is if workers meet the government’s fire with fire.

The roots of ETA 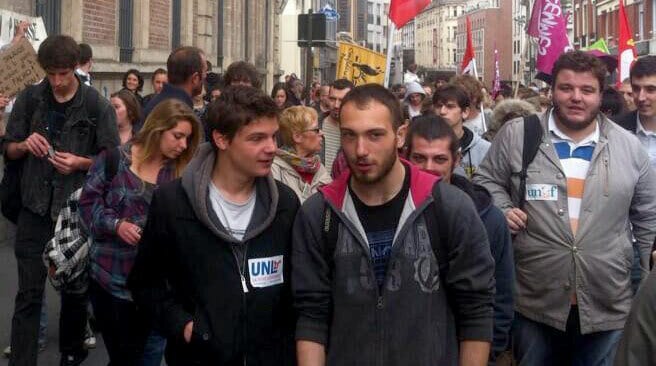 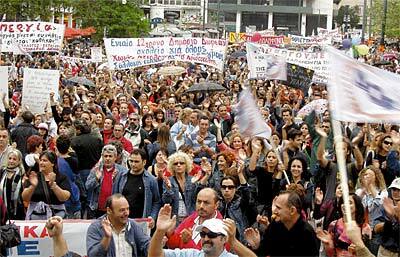 Greek teachers fight on into sixth week of strike