Over three million people demonstrated in over 200 cities and towns around the country and, as with the previous day of action on 29 January, the strike mobilised workers across both the public and private sectors.

More action is coming. Students, lecturers and other education workers were set to strike this week.

The overarching message of the protest on Thursday of last week was in opposition to the policies of Nicolas Sarkozy’s right wing government and its handling of the economic crisis. Sarkozy wants to push through wide-ranging attacks on pensions and huge cuts in public sector jobs.

His government has presided over “rescue packages” that have thrown large sums of money at the banks. Meanwhile over two million people are unemployed, and the prospect of more factory closures and job losses has driven angry people onto the streets.

Public support for the action is immense, with regular national surveys showing over 70 percent approval for the strikes.

A huge militant demonstration snaked its way through Paris from the Place de la Republique, in the heart of the French capital.

A surge of protesters poured out of the metro stations and from the side streets to join the crowds well after the ­demonstration’s official start time.

Zelda Aquil, 25, is a trainee teacher in the Val-d’Oise region, north of Paris. She told Socialist Worker, “We are facing job cuts at my school that will mean the teachers who remain will be working more hours.

“Since Sarkozy came to power we are effectively being asked to work to earn the right to live in France. Now there is an economic crisis, people are being forced to accept less money to do harder jobs.”

Delegations on the Paris demonstration varied from the highly organised contingents of major trade unions to the low paid hotel workers from the Holiday Inn.

There were delegations from ongoing strikes and disputes – including those against post office privatisation, for better conditions for research students, against cuts in the health service, and for rights for the “sans papiers” – migrant workers without residency papers.

Many placards, posters and stickers emphasised the need to follow the success in Guadeloupe and Martinique in the French West Indies, where a 44-day general strike achieved all 170 of its demands, including a hike in the minimum wage.

Activists from the New Anticapitalist Party (NPA) were out in force.

Olivier Besancenot, a leading figure in the NPA, told Socialist Worker, “There is a climate of social resistance which is encouraging. The workers and young people feel confident.

“Sometimes, in a period of economic crisis, it can seem that everybody is out for themselves – but here that’s not the case. There is a collective force being born and it must lead to an all-out general strike.”

There is debate in the movement about the next step. Trade union leaders met immediately after the demonstration – only to decide that no decisions on the course of action will be taken until later this month.

The majority would like to see another one-day strike on 1 May.

Alain Krivine, 1968 veteran and member of the NPA’s national political council, was clear about the problems with this strategy.

“For us the example to follow is what happened in Guadeloupe and Martinique. We are fighting now for a continuous general strike,” he said.

“At a time when there are real problems with living conditions and salaries, people can’t just replicate one-day strikes.

“This costs too much and there will be a danger of strike fatigue. People are going to tell us – either we go out on a general strike and make the financial sacrifice or we don’t fight any more.”

In the context of massive social unrest, these debates will become sharper and more important in the near future.

It is has become clear that the NPA’s drive for a rolling general strike and agitation at factories and workplaces is worrying the establishment and the more conservative union leaders.

There is everything to play for over the coming days and weeks.

Socialists from France speak out 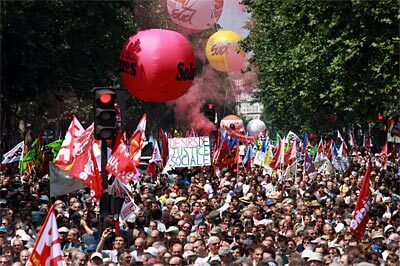 Austerity provokes a summer of resistance across Europe