From hope to despair in four years

This article is over 15 years, 3 months old
Lula was first elected as president of Brazil in 2002. He raised hope among millions of ordinary Brazilians that change was on its way.
By Joseph Choonara
Downloading PDF. Please wait...
Saturday 07 October 2006

Lula was first elected as president of Brazil in 2002. He raised hope among millions of ordinary Brazilians that change was on its way.

Political life in the country had, until then, been dominated by businessmen, bankers and the military.

Lula made his name as a trade union leader, at the head of a huge wave of struggles in the late 1970s and early 1980s. His party, the PT, emerged from these struggles.

But even in the run up to his election, Lula and the PT were moving sharply to the right. Lula promised to honour agreements drawn up between the previous government and the International Monetary Fund, and he appointed right wing figures to key positions in his administration.

The neo-liberal policies of the Lula government have hit the PT’s traditional supporters the hardest.

According to Raul Zibechi, a leading left wing analyst of Latin American politics, “The traditional foundations of support on which the PT rested came from industrial labourers and a certain sector of the urban middle class with university education. Today, however, the profile has changed.”

Zibechi argues that Lula’s remaining support is based on the very poorest, who have benefited from the Bolsa Familia (family welfare) programme created in 2003.

He argues that this has allowed Lula to win support in the north east, traditionally dominated by the right, as his support has fallen in the old industrial heartlands of south east Brazil. 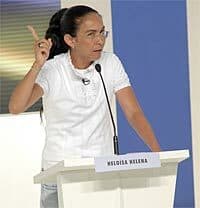