This article is over 8 years, 11 months old
Workers across Greece were set to strike on Wednesday of this week.
By Panos Garganas
Downloading PDF. Please wait...
Tuesday 19 February 2013

Workers across Greece were set to strike on Wednesday of this week.

There were no newspapers after journalists and print workers walked out a day early.

And for the first time peasants and small farmers said they would join workers to rally in the cities.

Farmers have been blocking roads for two weeks with their tractors.

Strikers want the government to understand that they can shut down the country if it doesn’t control rising petrol prices.

One main demand of the strike is to stop the wage cuts demanded by Greece’s international creditors.

The government is abolishing or sabotaging all of its collective agreements with wage cuts. Workers also want to defend their union rights.

They are defending the right to strike after the government used the law to ban strikes from Athens metro workers and seamen earlier this month.

Other workers struck to defend them and there were large rallies in the Piraeus port of Athens.

The government has tried to respond to the strikes in two ways.

It has tried to play it tough.

It says its agreements with the “Troika” of the European Union, European Central Bank and International Monetary Fund leave no room for concessions or exceptions.

At the same time it has tried to spin a visit by French president Francois Hollande on the eve of the strike.

It says French and German companies will invest in Greece. So if people are patient, things will pick up.

This is a lie. French and German companies are only looking to buy up the public services that the Greek government is planning to sell off.

These include the water company in Salonica, the trains and the gas company.

The government is weaker than it looks. A bill to change the collective agreement of seamen was quietly put back after their strike.

Occupations and strikes in town halls in December put back a programme of public local government sackings.

Now the Troika is again asking the government how it can reach its target of 15,000 job losses this year.

The government pretends it is strong and promises the end of the recession. But none of this is enough to make people back down.

The basketball stadium of Greece’s second city, Salonica, was packed out on Tuesday of last week, for a concert in solidarity with Biom metal workers.

They have not been paid in two years and are trying to get the capital to operate the factory as a co-operative. They have attracted a lot of solidarity.

This has been an opening for the left to argue that we don’t have to sit back with folded arms while unemployment rises.

We say that in every factory that is shut down or that makes redundancies there should be state intervention.

Every factory should be kept running and handed over to the workers.

Italian election will be vote on austerity 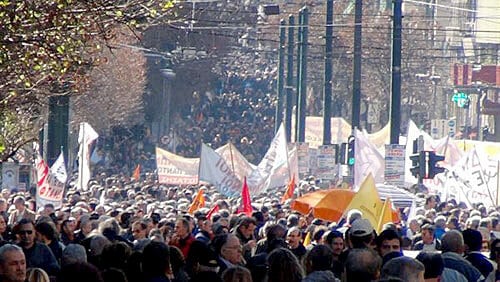