This article is over 15 years, 4 months old
A general strike in Palestine this week by public sector workers brought services to a halt in much of the area run by the Palestinian Authority (PA).
Downloading PDF. Please wait...
Saturday 09 September 2006

A general strike in Palestine this week by public sector workers brought services to a halt in much of the area run by the Palestinian Authority (PA).

Tens of thousands of workers, including teachers and civil service workers, began striking on Saturday 2 September over the fact that they have not been paid for the last seven months.

The US and the European Union have imposed an economic blockade of the Hamas government, which was elected in January, accusing it of being a “terrorist” organisation and demanding it recognise the state of Israel.

This shows that they are only interested in democracy when the “correct” people are elected.

The US and Israel want to crush the Hamas government and any resistance to Israeli dominance and occupation. The blockade, combined with the continuing Israeli occupation of the West Bank and the siege of Gaza, has driven the Palestinian people to even worse poverty.

The strike has led to arguments among Palestinians. A number of Hamas members claim that it is a strike led by members of Fatah – the group that Hamas defeated in January’s elections – to weaken Hamas’s grip on power.

The unions are saying that it is not a strike directed against the government.

There are demands from some sections of Palestinian society that the Hamas government broadens to become a national unity government, encompassing all parties. Some in the West are pressuring for this.

Mohammed Maragha, a worker at Bir Zeit university in the West Bank, told Socialist Worker, “The Palestinian economy has become dependant on money from the West over the last decade. Israel is getting Palestinian taxes and not giving them to the PA.

“The blockade is punishing everyone in Palestine.

“While the PA is led by Hamas, the strike has been mainly called by Fatah activists. When the PA was set up in the 1990s, after the Oslo Agreement, most of the workers were Fatah supporters. Over the last few years a number have shifted to being Hamas supporters.

“I would support the strike more if it was a partial strike, which raised more clearly the issue of sanctions against the PA. It should not be a strike against the government.

“The PA can’t do anything. It is an authority in name only. In the West Bank Israel controls everything. It has soldiers in the towns and cities. There is no security or economy.

“Everyone supports the workers. They have had very little pay over the last few months. They can’t afford to pay their rent or for healthcare. They only have enough for food.

“Over 80 percent supported the public sector strike, but saying the people responsible for the situation are the US, Europe and Israel.

“Although the economy is being destroyed, support for Hamas is increasing. Because Israel is tightening its squeeze, people are rallying round.

“The money from the US and Europe has always come with a price, which is to stop support for resistance, forget the questions of Palestinian refugees and Jerusalem. We are now paying that price.”

The continuing Israeli siege of Gaza is increasing the pressure on the Palestinian people.

Karen Abuzayd, head of the United Nation Relief and Works Agency, warned this week that living conditions there have reached breaking point.

‘The strangulation of commerce and trade has ruined the economy, it has brought the institutions of government to a point of near-meltdown and badly shaken the society,’ she said.

‘These pressures and tactics have not resulted in a desire for compromise on the part of the government or the people, or yet the fall of the government, but rather have created mass despair, anger and a sense of hopelessness and abandonment.’

Amjad Shawa, the Palestinian NGO Network coordinator for Gaza, said, “It is two and a half months since Israel imposed its siege. It controls the borders, the sea and the land.

“Everything is completely closed. We are having serious problems with food. Because Israel destroyed the power station we can go for hours without power.

“The international community has not had given any assistance to the Palestinian budget for six months. Government that’s say they support democracy are involved in this.

“We are calling on the international community to resume its assistance. Some 75 percent of Palestinians live in poverty while there is a 65 percent unemployment rate.

“Israel killed seven Palestinians in the Gaza Strip this Wednesday. Israel claims to have withdrawn from Gaza last year, but it is still occupying it.

“Palestinian civil society is not criticising the general strike. It is the right of workers to withdraw their labour. There is a similar outlook among the government and workers.

“The international community continues to cut our funds and supporting Israel as it continues to block Palestinian tax money from getting to the PA.”

Lebanese government cracks down on opposition 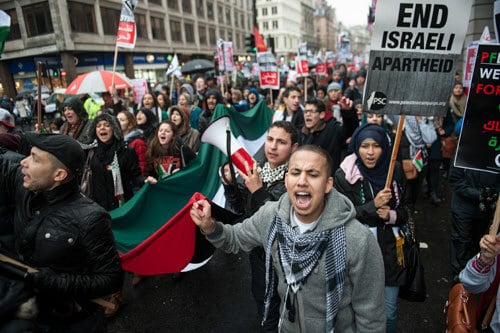