South Africa was brought to a standstill on Thursday of last week by a one-day general strike demanding government action over rising living costs.

The strike was called by Cosatu trade union federation. It included miners, teachers and workers in construction, textiles, car plants and banks.

Zwelinzima Vavi, secretary general of Cosatu, addressed the government from a rally outside the closed doors of parliament in Cape Town.

“We are poor, we are hungry, and our wages are no longer coping with our demands and the demands of feeding and clothing our families,” he said.

“If the government is not going to move with the necessary speed, we will again hit them where we know they will feel the pain.”

The immediate trigger for the strike was the announcement of a 27.3 percent rise in electricity prices. The electricity company says further price rises are likely. 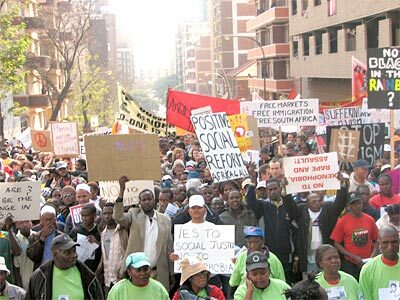