This article is over 10 years, 10 months old
The global elite is panicking that the crisis in Greece could destabilise the whole European economy.
Downloading PDF. Please wait...
Tuesday 21 June 2011

The global elite is panicking that the crisis in Greece could destabilise the whole European economy.

It fears that Greece could default on its debts and provoke a “Lehman Brothers moment” for state economies.

The collapse of the Lehman Brothers bank in 2008 precipitated the financial crash.

The European Union, the European Central Bank and the International Monetary Fund—the troika—want to impose even more severe austerity on Greece.

They want more privatisation and attacks on workers’ living standards in return for a new bailout.

The troika agreed a 110 billion euro bailout for Greece last year, which was supposed to help the state pay its debt.

But the austerity conditions that came with it further wrecked Greece’s economy.

Austerity has devastated workers’ living standards. But there has been huge resistance and a number of general strikes, including a massive one on Wednesday of last week.

The resistance has caused a deep crisis for the Labour-style Pasok government.

It faced a no confidence vote in the Greek parliament on Tuesday.

Protesters were set to besiege parliament once again.

If the government won the confidence vote, it planned to try and push through the new cuts with a vote in parliament next week.

Unions plan a 48-hour general strike to coincide with the vote.

Power workers began a series of 48-hour rolling strikes on Monday against plans to privatise their industry.

“The strike has been very solid with the first 48 hours having an impressive effect,” Panos Garganas, editor of the Workers Solidarity newspaper in Greece, told Socialist Worker.

“There have been some power cuts, and the government has made sure it was working class areas that suffered.

“This is a traditional tactic to stoke anger against strikers, but it has not worked.”

The struggle in Greece has shown the enormous potential for workers’ action to defeat austerity.

No wonder world rulers are worried. 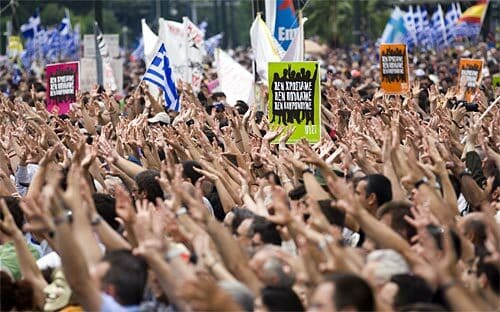 Voices from the Greek strikes and protests 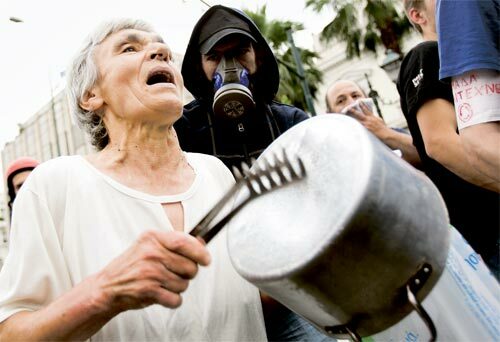 Jess Hurd's pictures of the Greek strikes and protests