Greek workers set for seventh general strike of the year

This article is over 11 years, 1 months old
Workers in Greece were to end a year of struggle with a general strike this Wednesday 15 December—the day of the government’s budget.
Downloading PDF. Please wait...
Tuesday 14 December 2010

Workers in Greece were to end a year of struggle with a general strike this Wednesday 15 December—the day of the government’s budget.

The Pasok Labour-style party is attempting to push through massive austerity at the behest of the European Union and the International Monetary Fund.

There has been a wave of resistance to this attack, with this week’s action being the seventh full general strike this year.

“The government has gone on a generalised attack after a long period of saying that it would not need to make any more cuts,” said Panos Garganas, the editor of the Workers Solidarity newspaper in Greece.

“But the crisis is getting worse so it is pushing through cuts in wages in the public sector.

“This is producing a generalised response. There have been a number of confrontations with the government, including all‑out strikes.

“Transport workers struck for five days this week, there’s an all-out strike by bank workers, and media workers are to strike on Friday 17 and Saturday 18 December.

“This latest strike has been coordinated from below. We are seeing a new, huge explosion of anger and the vote in parliament won’t be the end of it.” 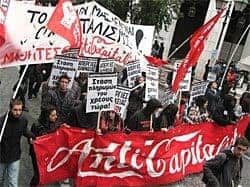