This article is over 16 years, 4 months old
The peasants in the Nile Delta village of Meet Shahala rose in rebellion after attempts by the old landlords to drive them off their land.
Downloading PDF. Please wait...
Saturday 03 September 2005

The peasants in the Nile Delta village of Meet Shahala rose in rebellion after attempts by the old landlords to drive them off their land.

The feudal family, headed by judge Ahmed Aziz el-Fiki, have been attempting to reclaim land given to the peasants during the land reforms following Egypt’s revolution in the 1950s.

In June the family, backed by hired thugs and intelligence officers, raided Meet Shahala to coerce peasants into signing away their rights to the land.

The peasants refused despite intimidation and beatings.

Armed thugs tried to seize a storehouse built by the peasants, claiming it was now the property of the el-Fiki family.

The thugs raided the village and began firing their guns to terrorise the farmers.

Within minutes the gang found themselves surrounded from all sides by the villagers armed with stones.

The thugs opened fire wounding a number of villagers before being driven off.

The villagers captured one of the hired gunmen and dragged him off to the police station only to be arrested for causing a disturbance.

Villagers were charged with “throwing stones” and “obstructing the work of agrarian reform employees”.

The uprising in Meet Shahala is part of growing rebellion in the countryside triggered by moves to reverse the agrarian reforms.

The villagers of Sarando resisted attempts by wealthy landowners to drive them off their land in March. 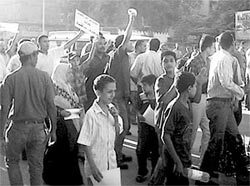