This article is over 9 years, 5 months old
Venezuela’s president Hugo Chavez Frias has died in hospital after a long fight with cancer. Mike Gonzalez looks back at Chavez’s life and ideas—and the Venezuela he leaves behind
Downloading PDF. Please wait...
Wednesday 06 March 2013

If revolution is the moment when the masses take to the stage of history, then Hugo Chavez’s Bolivarian Revolution began on 11 April 2002.

A right wing coup kidnapped him and proclaimed a new government. It lasted barely 48 hours.

Tens of thousands of Chavez supporters surrounded the presidential palace demanding his return.

Later that year, the right launched a bosses’ strike with the intention of paralysing the oil industry on which the country depended. This too was defeated by the mass mobilisation of Chavez’s supporters.

His victory in the presidential elections in 1998 hadn’t had much resonance outside Venezuela at the time. But within the country the effect was dramatic.

Chavez’s election manifesto was anti-imperialist, specifically hostile to the US which had dominated Venezuela throughout the 20th century.

It was nationalist, under the banner of Simon Bolivar, leader of Latin America’s 19th century independence movement. And it promised a reform of the corrupt state machine and the system of patronage it concealed.

The new constitution, passed by a delegate assembly in 1999, provided guarantees of social justice, human rights and the accountability of politicians.

But it was equally true that Chavez was still relying on his military supporters (see below).

He enjoyed mass support among the poor, but that relationship had no organised political expression. And his party, the Fifth Republic Movement, proved to be unaccountable and susceptible to the corruptions of power.

In 2000 Chavez presented himself for new elections under the rewritten constitution.

And between 2002 and 2005 the Bolivarian process took a new and more radical direction. The state oil company was placed under direct state control. Until then it had operated autonomously, like any other multinational.

Its profits then funded programmes of social reforms—in health, education and housing in particular—driven by rank and file organizations called missions.

In 2005, speaking at the World Social Forum, Chavez announced that Venezuela was constructing “21st century socialism”. While it was received joyfully, it remained unclear what it meant.

It was clearly different from Stalinism, emphasising democracy and popular participation, and it was radically anti-imperialist.

Chavez scourged Bush and the US invasion of Iraq at the UN, and began to build organisations of Latin American unity linking other “new left” governments in Bolivia and Ecuador.

And in a series of electoral tests it became clear that Chavez’s support was growing. In 2006 he won the presidency again with over 60 percent of the national vote. Some weeks later he announced the formation of a new party, the United Socialist Party of Venezuela (PSUV).

Had the revolutionary nationalist become a revolutionary socialist? Chavez and others frequently referred to Leon Trotsky, Rosa Luxemburg and Antonio Gramsci—as well as Simon Bolivar, and God.

If the transformation was real, then the PSUV would be an expression of power passing directly into the hands of the mass organisations, which was the brief expectation of many on the left.

But the model of the party adopted by the PSUV appeared to be the Cuban Communist Party, not noted for its democratic character.

The irony of the Bolivarian revolution is that its undoubted social advances were made possible by the rising price of oil.

This funded the social programmes and oil remains the country’s main export earner.

Yet, despite the hysteria of the anti-Chavez camp, there was no policy of redistribution.

Some firms were nationalised and compensated at market rates, but for the most part only when they were abandoned or guilty of the most barefaced manipulations.

The year 2006 was in many ways a crossroads. The creation of Latin American blocs such as ALBA and CELAC were expressions of Chavez’s Bolivarianism, his Panamerican vision.

Yet this was not the 21st century socialism, the democratic revolution, that had been promised.

In Venezuela a new elite was emerging, a dominant bureaucracy in red caps and T-shirts. At the same time inefficiencies, the failure to complete major projects, and the incorporation of mass leaders slowly undermined the mass organisations whose struggles had carried Chavez to power.

Every vote confirmed Chavez’s immense popularity. But conversations at street corners testified to an increasing frustration with a new political machine that appeared to function at Chavez’s whim.

There was no open process of decision-making. Instead policies were announced—often without prior notice—on Chavez’s entertaining Sunday morning TV specials. The impression was of a regime without a strategic vision that created policy on the hoof.

Political discussion was increasingly polarised. Public denunciations replaced debate. And power was becoming concentrated on Chavez and his immediate circle.

But it was not the idea of creating an alternative capitalist bloc that had brought Latin America’s mass movements on to the streets. It was the promise of “people’s power” that made Chavez such a potent symbol of resistance and of a different, socialist future.

On the eve of his last journey to Havana for medical treatment, Chavez assured his television audience that he was leaving a strong collective leadership behind him.

In fact the power of the Chavista state was concentrated in Chavez himself. Without him the sectional interests and power hunger of individual members of his government are almost bound to emerge and conflict. No one has the charisma that Chavez undoubtedly possessed.

The alternative that faces Venezuela after Chavez is either the growing use of a state that claims his name but cannot claim his influence, or the re-emergence of a powerful mass movement still ready to struggle for “people’s power”.

He left behind a language of liberation and solidarity, but the structures to turn them into a new and different kind of society have yet to be built.

The outsider who became a legend

On 4 February 1992 a young parachute colonel in Venezuela led a coup. It lasted just 24 hours.

His name was Hugo Chavez Frias. He was arrested, and given a minute on television to call his people back. His announcement that it was over “for now” became legend.

For decades a corrupt two-party bureaucracy had shared power—and the rich pickings from the oil industry.

In 1989, the recently elected president Carlos Andrés Pérez agreed to an austerity programme from the International Monetary Fund. The population of the poor barrios exploded in three days of urban insurrection, the “Caracazo”.

The rising was brutally repressed, but the anger and the protests continued.

Hugo Chavez was born to a poor family in the province of Barinas. His mother was a teacher.

Unlike most of Latin America, the Venezuelan armed forces did offer a career path for the lower middle class and Chavez entered the military academy.

His story has certainly been mythologised, but Chavez bore the unmistakable marks of his background—his chiselled mixed race features, his way of speaking and carrying himself, his genuine love of popular culture.

That is partly why he commanded such profound loyalty among Venezuela’s poor and working classes.

The ferocious hatred of Chavez among the middle classes is for the same reasons—because his racial and social origins marked him as an outsider.

In the academy Chavez rose quickly, and not just because he was good at baseball, which he claimed was his other favoured career.

He gathered around him a small group of young officers from a similar background.

Their main political influence was Douglas Bravo, who led the guerrilla movement in Venezuela. Bravo had split from the Communist party when it abandoned a guerrilla strategy.

His central notion was what he called the “civic-military alliance”—a coalition of dissident military officers, peasant and workers organisations, and an armed wing.

The 1992 coup was intended to be a simultaneous action of all three, but to Bravo’s annoyance Chavez limited it to a military action. He later shifted his strategy in an electoral direction.

Venezuela at the crossroads: voices from inside the revolution

Venezuela: tensions within the process

Mike Gonzalez looks at the movements and debates in Venezuela bit.ly/Vl03Cv 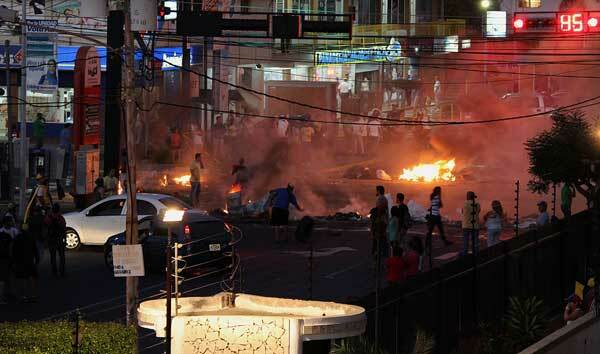