Kashmir: roots of the Pakistan/India conflict

This article is over 20 years, 0 months old
THE CYNICAL territorial ambitions of the rulers of India and Pakistan lie behind the threat of war between them. Their conflicting claims over Kashmir and its 12 million people have sparked hostilities since the end of British rule in 1947.
Downloading PDF. Please wait...
Saturday 01 June 2002

THE CYNICAL territorial ambitions of the rulers of India and Pakistan lie behind the threat of war between them. Their conflicting claims over Kashmir and its 12 million people have sparked hostilities since the end of British rule in 1947.

Both sets of rulers understand the strategic importance of Kashmir and both crave control over it to bolster their own states. The territory borders not only Indian and Pakistan, but also extends to the border of China, Afghanistan and Tajikistan.

The majority of the population of Kashmir are Muslims. The Indian government wants to keep the part of Kashmir it occupies in order to shore up its claims to be a secular state with citizens of different faiths. The Pakistan military regime says it is a Muslim state and should control Kashmir because the majority of the population there practise the same religion. Rulers of both India and Pakistan try to use the issue of Kashmir to stir opposition against each other and to prop up domestic support. The mountainous area of Kashmir is, like the rest of India and Pakistan, a former British colony.

It was run by a British-backed ruler until Britain was forced to leave the Indian subcontinent in 1947. The divisions between the Muslim minority and Hindu majority fostered by the British Empire resulted in the bloody partition of the subcontinent into the states of Pakistan and India when British rule ended. Kashmir was torn between the two states, and was pressed to become part of India.

India and Pakistan went to war over Kashmir in October 1947. Kashmir itself became partitioned. Despite the existence of a United Nations resolution since 1948 calling for a ‘free and impartial plebiscite’ to be carried out in Kashmir to determine its future, India has not allowed one to take place. Kashmir remains divided in two. Nine million people are in Indian-controlled Kashmir known as Jammu and Kashmir.

Three million Kashmiri’s live in Azad Kashmir, or free Kashmir, which is under Pakistani control. Even when war has not been raging 70,000 people have been killed in Kashmir since 1990.

Indian forces have killed at least 60,000 Kashmiri people in the areas under their control. India’s special task force carries out bloody ‘counterinsurgency’ operations, inflicting rape, torture and violence in an effort to suppress Kashmir’s movement for independence.

Rigged state elections in Jammu and Kashmir in 1987 added to the alienation of already disenchanted Kashmiri citizens. By January 1990 the Indian government imposed direct rule upon the areas of Kashmir under its control. In the Pakistani controlled area of Kashmir political appointments are also dominated by the central state.

Pakistan’s rulers have exploited the brutal repression suffered by the Kashmiri people at the hands of the Indian state. They have funded, armed and trained Islamic groups like Lashkar-e-Tayyeba to distort and influence Kashmiris’ genuine demands for independence. The armed conflict that has raged in the region has delivered no steps towards liberation for the people of Kashmir.

The aim of the Pakistani elite is to build a movement that can fight to attain Kashmir’s incorporation into Pakistan. The military regime of Pakistan under General Musharraf has not delivered the stability he promised.

Nor is there any real hope that the military will give up power and return the country to democracy. The Hindu chauvinist BJP government of Atal Behari Vajpayee has presided over and colluded with the brutal massacres of Muslims in the state of Gujarat. The BJP, like the military regime of Musharraf, promotes communal division and military adventures while failing to deliver for hundreds of millions of people trapped in dire poverty.

Only if Kashmir is free from domination by either India or Pakistan will there be any chance of the needs of its people being met. 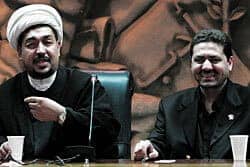 Iraq: ‘We can see there are different forces in Britain’