Amplats management issued a statement saying that they had “voluntarily” closed five mines to because of “concerns over workers safety”.

Strikers from Amplats joined Marikana workers at a rally in Blesbok football stadium in Rustenburg, a city in the platinum mining region about 60 miles from Johannesburg.

Strike leader Mametlwe Sebei told workers, “On Sunday, we are starting with a general strike here in Rustenburg.”

Angry workers have left the National Union of Mineworkers (NUM), which is closely associated with the governing ANC, saying it does not represent their interests.

Some 15,000 gold miners are still on unofficial strike at KDC west mine. The NUM sent officials to try and convince them to return to work. As they approached a workers’ mass meeting the officials were met with cries of “Voetsek! Fokof!” (Go! Fuck off!).

But on Thursday he complained about “illegal strikes, incitement and intimidation” and claimed that “demands for better wages can and should be addressed within the country’s labour relations framework”.

Clampdown on socialists in South Africa leads to 49 arrests 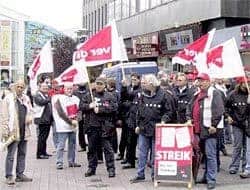