This article is over 13 years, 11 months old
Over 2,000 Egyptian activists were arrested today as they attempted to assemble a peaceful demonstration in front of the Arab League in downtown Cairo.
Downloading PDF. Please wait...
Wednesday 23 January 2008

Over 2,000 Egyptian activists were arrested today as they attempted to assemble a peaceful demonstration in front of the Arab League in downtown Cairo.

The demonstration was to protest at the latest atrocities against Palestinians in the Gaza Strip. It had been called by the Socialist Alliance – a coalition of leftist organisations and individuals – and was supported by Muslim Brotherhood members.

From Tuesday evening the government rounded up Islamist activists at their homes and workplaces in different governorates across Egypt, in an effort to abort the demonstration.

Among those seized was Dr Magdi Abdo from Cairo, who is still receiving treatment after a recent stroke – his whereabouts are not yet known. Also taken was Ali Abdel Fattah from Alexandria, who is a leading member of the International Campaign Against Zionist and American Occupation.

The arrests and violence climaxed on Wednesday morning when, according to eyewitnesses, subway stations were closed down and security forces randomly rounded up people around the neighbourhood.

As we write there is still a heavy security presence and arrests are continuing in downtown Cairo.

The exact number arrested should be known tonight or tomorrow morning, when the detainees arrive at the General Prosecutor’s office, and more statements are collected from demonstrators. Some of those arrested are in a security camp in Darasah, Cairo, but the whereabouts of others is still unknown. 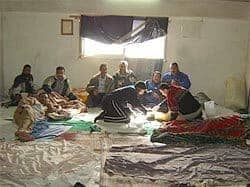