The March for Dignity and Against Racism was organised by a group of women from immigrant backgrounds. Large numbers of black people, Muslims and immigrants took to the streets in defiance of racist politicians who seek to marginalise them in French society.

It was backed by a wide range of supporters from popular musicians to parties of the far left. Veteran US radical Angela Davis was a prominent supporter.

Ndella Paye is on the organising committee for the march. She told Socialist Worker, “It’s a completely joyful demonstration, several miles long.”

Police violence was a key theme of the march. It was timed to mark ten years since 15 year old Bouna Traore and 17 year old Zyed Benna died fleeing police in Clichy-sous-Bois near Paris. Their deaths sparked three weeks of rioting all over France against repression and racism.

The march’s name also refers to the 1983 March for Equality and Against Racism. Led mainly by immigrants from North Africa, it was France’s first nationwide anti-racist mobilisation.

But the organisation that grew out of that movement, SOS Racism, is closely tied to the Labour-type Socialist Party – now in government enacting racist laws itself.

Yet Saturday’s march shows that anger against racism cannot be contained forever.

Next week’s Socialist Worker will feature a major interview on riots, repression and anti-racism with Omar Slaouti, a campaigner in Argenteuil near Paris.
Topics Anti-racism, France 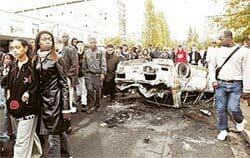 France: rage of the poor