This article is over 9 years, 11 months old
Spain has been rocked this week by a wave of resistance by workers and unemployed activists. They are protesting at a £50 billion cuts package announced by Mariano Rajoy, the country’s right wing prime minister.
By Luke Stobart
Downloading PDF. Please wait...
Sunday 15 July 2012

Spain has been rocked this week by a wave of resistance by workers and unemployed activists. They are protesting at a £50 billion cuts package announced by Mariano Rajoy, the country’s right wing prime minister.

The demonstrators have also been inspired by solidarity with striking miners—and enraged by vicious police repression meted out against them.

“Madrid is at boiling point,” activist Laura Fraile told Socialist Worker. “The miners have instilled everyone with their courage and strength.”

The square was packed with tens of thousands of mostly young protesters at midnight on Friday. On Wednesday around 400 health workers occupied the lobby of the Madrid’s Ramon y Cajal hospital to protest against health cuts and privatisation.

There were substantial protests in other cities, including Valencia, Valladolid and Barcelona. Workers blocked roads in Zaragoza. In Andalucia they spent the day working “with their arms folded”.

Spain’s public sector workers are in line for a 7 percent pay cut—coming on top of a 5 percent cut two years ago under the previous government.

The wave of popular anger follows a police attack on Wednesday’s hundreds of thousands strong demonstration in Madrid led by striking miners.

The police violence has continued since. Riot police were photographed arresting and manhandling an elderly woman.

“They didn’t stop at using force against protesters,” said Laura. “They’ve attacked groups of people leaving the metro and a group of skaters queueing up for the cinema.”

Protests around the country have targeted the offices of Spain’s ruling People’s Party (PP). It is now a mainstream conservative party, but it can trace its roots back to General Franco’s dictatorship—and contains many MPs with extreme right views.

The protesters’ slogan was “que se jodan”—“they can go fuck themselves”. These were the words that PP deputy Andrea Fabra yelled out against the jobless on Wednesday as Rajoy announced cuts to unemployment benefits.

Rajoy’s long list of cuts represent the harshest measures taken in Spain since the end of dictatorship in the late 1970s.

Most of the protests so far have been organised by rank and file workers and the 15 May movement, tapping into a widespread mood of burning anger against the PP.

Now Spain’s two biggest trade union federations, the UGT and CCOO, have called a day of protests for Thursday this week. They have also indicated they could call a general strike in the autumn.

Meanwhile the miners’ strike continues after almost 50 days. Three miners performing emergency maintenance cover where almost killed in a mine collapse on Thursday. 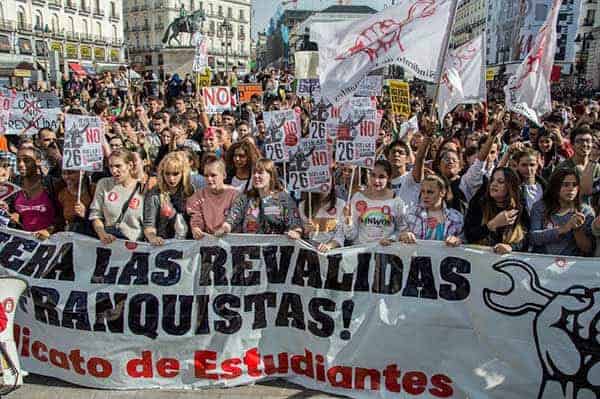 Video of protests in Spain