This article is over 10 years, 3 months old
On Saturday more than a million people joined jubilant protests across Spain in another show of strength by the indignados movement.
By Luke Stobart in Barcelona and Enric Rodrigo in Madrid
Downloading PDF. Please wait...
Tuesday 18 October 2011

On Saturday more than a million people joined jubilant protests across Spain in another show of strength by the indignados movement.

Many workers fighting the cuts were there, including tens of thousands of teachers in green T-shirts. They have recently held strikes and occupations against cuts.

In Barcelona, over 300,000 joined the protest. There were protests in dozens of other cities including 100,000 in Zaragoza, 50,000 in Seville and 40,000 in Valencia. Countless small towns and villages held protests.

Unions and left wing parties mobilised members to take part—despite a formal ban on their participation.

The size of the demonstrations was remarkable given that they were organised by a five-month old grassroots movement.

It is no surprise that the Spanish protests stood out. The call for a global day of action on 15 October came from Spain’s mass square occupations this summer.

Recently the Labour-type social democratic government joined with the conservative opposition to amend the constitution. It wants to stop any future governments from funding public services by getting into debt.

Savage cuts by regional governments have led to strikes and struggles that have maintained and spread the movement.

But the strength of the protests took many by surprise—particularly as attendance in the movement’s neighbourhood assemblies has dropped significantly.

The question for the movement here is how to involve more people on a more day to day basis.

For many, attending long assemblies is a difficult option. And the rejection of trade unions by some sections of the movement limits its ability to shape workplace struggle.

But workers participating in the movement have taken its ideas into their struggle. This is particularly true of teachers, who have created their own mass assemblies.

It was hard to hold back the tears on Saturday. Despite all the hardships, there was a carnival feeling. At the end of the evening, in Madrid’s Puerta del Sol, a 150-strong orchestra played Beethoven’s “Ode to Joy”. It was a fitting tribute to the day. 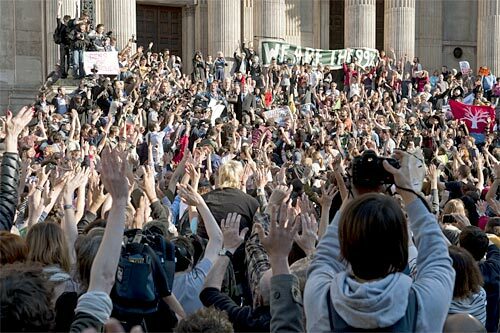